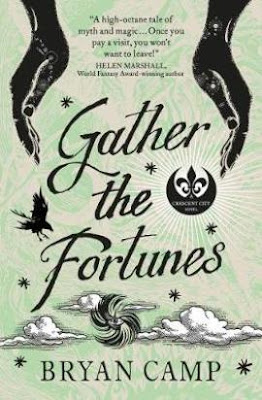 
Renaissance Raines has found her place among the psychopomps - the guides who lead the souls of the recently departed through the Seven Gates of the Underworld - and done her best to avoid the notice of gods and mortals alike. But when a young boy named Ramses St. Cyr manages to escape this foretold death, Renaissance finds herself at the center of a deity-thick plot unfolding in New Orleans. Someone helped Ramses slip free of his destined end - someone willing to risk everything to steal a little slice of power for themselves.

Is it one of the storm gods that's descended on the city? The death god who's locked the Gates of the Underworld? Or the manipulative sorcerer who also cheated Death? When she finds the schemer, there's gonna be all kinds of hell to pay, because there are scarier things than death in the Crescent City. Renaissance Raines is one of them.


Gather the Fortunes is the second novel in the Crescent City series of fantasy novels by Bryan Camp and one of the things that worried me was whether or not I would be lost without having read the first in the series.

Luckily, that wasn't the case at all. In fact, quite the opposite. Gather the Fortunes offers a lot to the reader that hasn't read the first book. Not only does it flow really well but it will also keep the reader making their first trip to Crescent City hooked in to the story in such a way that they won't be able to put the book down. There were parts that I enjoyed but I got the feeling that if I had read the first novel in the series, then it maybe would have had a bit more of an impact story wise. That said, those moments still worked incredibly well for me, as a first time reader.

One of the main things that struck me was the simple fact that you don't know lots about the various characters. Normally, that would make them feel flat and uninspired but here, Camp drops character heavy moments with such a subtle skill that when you do learn more, it really makes you care about each and every character. I can honestly say that I don't think there is a weak character amongst any of them, even the bit players all have their own personalities and purposes in the tale.

Another thing that Camp does incredibly well is the fact that he balances so many believe systems in the story that it feels like he is the writing equivalent of one of those performers you see that spin multiple plates at the same time without dropping any. He combines Greek, Norse, Native American and more in this love letter to New Orleans and not once do any of them feel rushed or forced.

The strongest part of the story for me was easily Camp's world building. You honestly feel like you are slap bang in the middle of the city and the action with it all feeling so utterly real that you can't help but be taken along with the flow of characters, twists and turns. In places, there are feels of Neil Gaiman and others feel almost like a sly and more sarcastic Terry Pratchett in how some of the characters interact with one another but it still comes across as very original.

All in all, if you can, get yourself a copy of this. It's an exciting and twist filled novel that will thrill fantasy fans and anyone looking for a story full of magic and wonder. There's almost a child like wonder in some of the scenes too, which made it utterly endearing.

Will definitely be checking out Camp's other work now that I've read this.