Hats Off to Laurel and Hardy Review 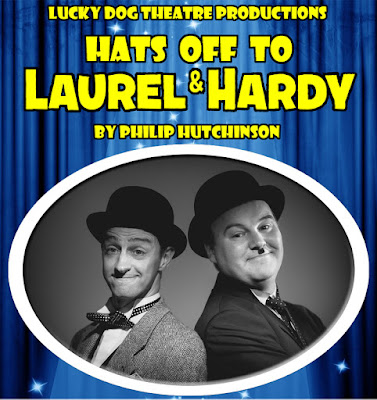 
It's been half a century since Stan Laurel and Oliver Hardy died.  There is good reason why they are the best-loved comedy duo of all time.  They were the pioneers of modern comedy and their movies have delighted generation after generation for almost 100 years.

'Hats Off To Laurel And Hardy' is a brand new show about the lives of Arthur Stanley Jefferson (Stan) and Norvell Hardy (Ollie).  It will guide you through their early lives, their steady rise to international stardom, the decline of their movie careers and their phoenix-like revival on the stages of Europe.  It details their commitment to their work, the appreciation of their fans, the love of their wives and - most enduringly - their unerring devotion to each other.

Expect recreated highlights from their huge canon of work, accompanied by a little singing and some questionable dancing.  Lucky Dog's continuing national tour plays to packed houses and standing ovations.  Prepare to laugh your socks off before finally having your heart broken.


As a huge Laurel and Hardy fan, I've seen a huge amount of shows, documentaries and more about the wonderful comedic duo so I was very eager to see this show at a local venue called The Guildhall in Leicester.

What I came to see ended up seeing was, by far, my favourite of all the things I have seen about my two favourite comedians.

When Carpenter and Hutchinson came on to stage, one thing struck me. Their mannerisms were absolutely spot on to such a degree that it felt like watching the actual Laurel and Hardy themselves and within moments, they had the audience in absolute hysterics.

Going in to loads of different parts of their lives, the audience were riveted to the performances on the stage. Equal parts funny, equal parts heart breaking, Hutchinson and Carpenter had the audience eating out of the palms of their hands. The interplay between them was absolutely crisp and wouldn't have felt out of place in one of the Laurel and Hardy classics.

Another thing that struck me was their sheer attention to detail, not only in their performances, but also in their recreated video parts too. The passion and knowledge of their subject positively shines through in each movement and piece of dialogue too.

All in all, if you are a fan of Laurel and Hardy, or even just have a passing interest, then I honestly can't recommend this show high enough. As an audience member, I couldn't take my eyes from them the entire time and their mannerisms, like I said earlier, are so spot on on that you  really believe that you're watching the real deal.

Visit their website at Lucky Dog Theatre Productions
Posted by Pat Scattergood at 16:25 No comments: