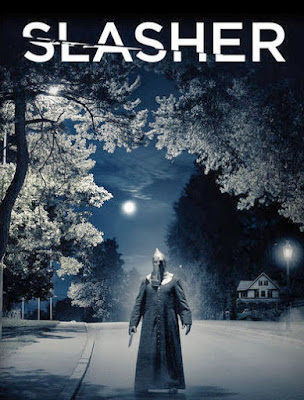 AKA: Slasher: The Executioner


Slasher was the first own-produced series by the now defunct U.S. TV channel Chiller and centers around a young woman, Sarah, who is confronted with a series of horrifying copycat murders, that are based on the widely-known killings of her parents years ago.


I'm a huge fan of old school style slasher movies from the 70's and 80's and really feel that when they're done well then they can range from being really good up to classic movies.  Even when not done well, they can be a good slice of cheesy fun as well.  Obviously there are some downright awful ones out there but that can be said about any other movie genres too.

I was aware of the Scream television series, although I've not watched that one yet, and saw a lot of horror fans recommending this Canadian series so I figured I would give it a go.

One of the things that struck me the most was the beautiful cinematography by the team here. Even if they don't have the biggest of budget for this series, which can sometimes show in this season, it still looked absolutely stunning in places.

Story wise, it's not going to win any awards for originality as the whole idea of someone being haunted by copycat killings that mirror the killings of someone close to the main character has been done in many movies before.  Some really well and others really badly. Here, the eight episode run does a good job of building up the foreboding and suspence through the eight episodes.  That said,  there were quite a few moments that bogged the episodes down and even repeated parts over and over.

I think the story struggled a lot to find enough material to warrant eight episodes. If it had have been kept to maybe six episodes and had some of the scenes trimmed or removed, I feel it would have flowed at a much better pace.  To have the main character chased by the killer in nearly every single episode felt massively like overkill to such a point where after the first two times, when it happened again it made me groan in a "oh here we go again" type feeling instead of creating a feeling of dread or fear.

Another thing that annoyed me was the way they'd have the characters say a line of dialogue only to do a complete 360 seconds later.  That was especially true in the final episode where the main character had a near complete personality change.  I feel that the route they were going was to make  the character have suffered so much that they then bring themselves down to the killers level in an effort to get revenge but it just felt so out of place, especially when they were shown a couple of days later in a "driving in to the sunset" type finale with next to no repercussions and all the mistrust between the two characters suddenly forgotten as it didn't serve a purpose for the story.  Also, the reveal of the killer seemed to fall a little flat.  Not  only did they give a bit of a half arsed back story for the reasons for the murders but to also give so many "oh no it's definitely not that person" moments of dialogue made it very, very obvious who it was from the second episode onwards.

With all that said, it's not a bad or awful series at all.  The acting was rather hit and miss, especially with the two main characters, ranging from being very good to being very wooden and almost bored while saying their dialogue.  I wasn't expecting Oscar winning acting of course but there were some moments where I wanted to scream at the screen to tell the character to show some emotion.

The characters themselves are rather unlikeable but I believe that's the point from a story point of view because the murders were based around the sins that the characters have committed that make them unlikeable.  My favourite character however was very likeable and sympathetic called Robin, the actor strangely turns back up in season two but as a completely different character.

Deaths wise, and let's be honest that's why we watch slasher movies and television shows, are quite inventive and in places, rather gory so that should satisfy even the most ardent of gore hounds amongst us.

All in all, the show was a little disappointing in places but still worth taking a look at if you like old school style slasher movies. If you can ignore some of the characters really stupid decisions, which I won't mention as they're spoilers, that might make you want to shout at the screen and are able to ignore some pretty big plot holes then it's worth checking out. 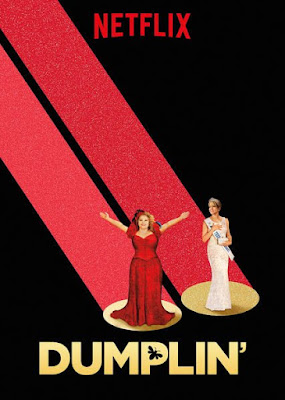 Based on the Book By
Julie Murphy


Willowdean ('Dumplin'), the plus-size teenage daughter of a former beauty queen, signs up for her mom's Miss Teen Bluebonnet pageant as a protest that escalates when other contestants follow her footsteps, revolutionizing the pageant and their small Texas town.


I am a huge fan of the singer Dolly Parton. I'm a huge fan of cheesy movies where someone doubts themselves and then realises they can actually do what ever it is that they need to do. When I found out there was going to be a Netflix movie that combined the two, well I was excited.

I went in to the movie fully expecting an out and out cheese fest that would be largely forgettable once the end credits rolled. What I didn't expect was a heartfelt movie that would be so touching and fun that I would want to watch it again as soon as it had finished.

A lot of the reviews have said that the movie is massively changed from the book that it is based on but, as I haven't read the book then I can't really comment on that. However, that said, if the book is as enjoyable as the movie despite being different then I'll be picking myself up a copy of that rather soon.

One of the things that I liked about the movie was that while it wasn't the most original movie I've ever seen, the performances are so superb and memorable across the board that it raises the quality of the whole movie a lot higher than it could have been. In particular, the performance of  Danielle Macdonald as Willowdean is an absolute delight. She manages to be hilarious funny, bringing you to tears of laughter but then in the very next scene shows the character as so fragile that she has you in tears of sadness too.  It's because of her performance that you can't help but will her on during her journey. It's the same with her friends too. They may not take as much of the spotlight of the movie as she does but each character is so different and have such varying personalities that each and every one of them is as memorable as each other.

One of the things that impressed me was the simple fact that the growing romance between Willowdean and Bo was so simply written that it was brilliantly effective and heart warming, even bringing more than a tear to my eyes.

The soundtrack to the movie, full of songs both old and new by the legendary Dolly Parton, is almost a character all by itself.  The songs puncuate the story perfectly and really ramp up the emotion in the scenes too.

One downside to the movie that I found was that they left a couple of character moments a little short changed but the rest of the movie is utterly brilliant. In fact, I'd say it's the best feel good movie that I've seen in a long time. 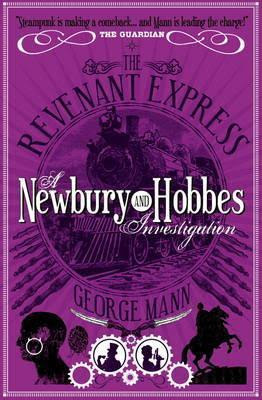