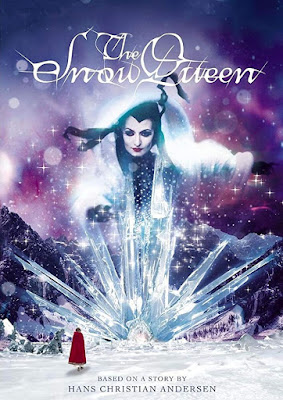 Based on the Story By
Hans Christian Andersen


When Gerda befriends penniless Kay their growing friendship is cut short after a fragment of glass pieces his eye and turns his heart cold and cruel.

Enchanted by the Snow Queen, he is swept away on her chariot over the icy landscape to her frozen palace in the North.

Gerda embarks on a dangerous but magical journey to find and rescue Kay from the clutches of the evil Snow Queen but will this girl in her red velvet cloak be a match for the winter witch?


I'd heard many things about this BBC version of the often filmed tale of the Snow Queen.  I've heard it as an unwatchable mess and I've heard it described as a thing of beauty with a graphic novel feel so I was eager to get it home to watch after finding it in a charity store.  So where on the scale does it land?  Is it an unwatchable mess or is it a thing of beauty?

Well, if I'm being completely honest, it's a bit of both.

Originally intended to just be the music with some computer generated graphics, this version of the Snow Queen was meant as a travelling live performance with an orchestra peforming the music while the animated sequences played on the screen.  With this adaptation of that, they've added some live action scenes, over the top of the generated backgrounds, to try to give it some substance.  On paper, that sounds like it should work.  The story itself is a lively one that soars when it's adapted well but here, it comes across as rather liveless in places and messy in others.  I get that they were going for a classicly animated and jerky feel of the old European cartoons but all that's succeeded in coming across is a matter of style over substance.

The performances are all rather odd.  A couple are completely devoid of emotion and others are over the top, hammy performances that feel at odds with the other characters.  Even the raven, voiced by the wonderful Patrick Stewart himself, feels like Stewart was rather bored or frustrated with his lines and that ends up coming across as monotone.

One thing that annoyed me, as a fan of the original story itself, was that the really short run time of 56 minutes really hampered the growth of the characters and a large chunk of the story was carved out and replaced with scenes with repetative music and scenes.  My favourite part of the original story was the slow growth of Gerda falling in love with Kay and it being that love that spurred her on to confronting the Queen.  Here, there's none of that.  Instead the pair come across as friends that are only slightly close and Kay's transformation in to a cold hearted and mean person is only shown by him pushing the head off of a snowman so that subtle part of the characters storyline is lost entirely.  Instead, it came across as little more than him having a tantrum.

The movie built to it's conclusion and with some of the beautiful background scenes and use of the computer generated graphics really felt like the conclusion was going to be eye catching but it came across as massively underwhelming and anti-climactic at best.

It wasn't all bad.  The computer generated backgrounds, while hit and miss in some places, were for the most part really pretty and nicely done at least.