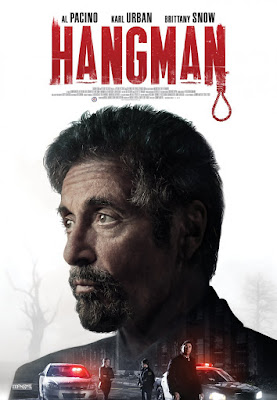 
Decorated homicide detective Ray Archer (Al Pacino) and his partner, criminal profiler Will Ruiney, (Karl Urban) are tasked to catch one of the city's notoriously vicious serial killers who is playing a twisted version of murder using the child's game - HANGMAN, while crime journalist Christi Davies (Brittany Snow) reports on the crime spree, shadowing the detectives.


I have to say, I was a bit dubious when I heard about a movie based upon the paper and pencil game called Hangman.  How would that work?  How would they make an interesting movie based on a simplistic game such as that?  I figured I would give it a go seeing as I like Al Pacino and Karl Urban movies, plus it was on Netflix and I had an evening free so why not?

I must admit that what I ended up watching was actually a very interesting crime thriller that managed to take it's inspiration from the old game and make it in to a creepy and atmospheric thriller that invoked memories of how much I liked movies such as Seven and Along Came a Spider.

Hangman was a well paced thriller that actually gave the killer an almost sympathetic reasoning for his crimes while at the same time, not showing the cop characters as being perfect or flawless.  I liked that they used shades of grey for the characters so show that everyone has mistakes, flaws and can make the wrong decisions that affect other people down the line.  It was nice to see characters with more than just a 'I'm a good guy, you're a bad guy' type motivation.

Pacino gave a solid performance as Ray Archer, a retired detective.  The way he started the movie as having the character seeming to be almost bored by his life outside of the police force was a nice touch and then he became more animated in his personality as the investigation went further.

It was the same with Urban's portrayal of Will Ruiney, a man haunted by the mysterious death of his wife that may or may not have been connected to the case they were investigating.  It was the most inventive backstory for a character but Urban did well with the the writing he had to work with.  It was similar with Snow's character and I actually ended up wanting to know more about her than the movie gave us.

There were some rather inventive character deaths, which is good for this kind of movie, yet they kept them as realistic as they possibly could.  The discovery scenes where they not only found the bodies but also investigated them had a mix of a sense of urgency but also dread running through them.

All in all, it wasn't the most original movie I've seen, including a cliched ending.  That said, I really enjoyed it and would happily watch it again.

Posted by Pat Scattergood at 04:19