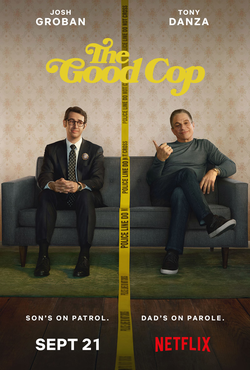 
Big Tony is a lovable, but not exactly honorable, former NYPD officer who never followed the rules. He lives with his son, TJ, a straight-laced NYPD detective who always follows the rules while solving Brooklyn's toughest cases. They may be an odd couple but they become unofficial partners with Tony Sr. offering his overly cautious son blunt, street-wise advice.


With someone such as Andy Breckman, the award winning creator of the television series Monk, at the helm of a new crime series, I had really high hopes for The Good Cop after stumbling across the show while browsing Netflix one evening.  The synopsis didn't exactly grab my interest, as it sounded really cheesy, but I decided to give it a go once I'd found who had created it.

For the first part, this ended up being a well put together series.  The stories managed to be interesting and exciting while at the same time being funny and entertaining but it wasn't exactly original.  In fact, there seemed to be parts the Breckman had lifted wholesale from the Monk television series, including a major plot point of the wife of one of the main characters having died in mysterious circumstances.

That said, while the stories were enjoyable, it was the characters that hooked me in.  I'll admit that I was dubious about the casting of Josh Groban, yes the famous singing Josh Groban, but he not only held his own alongside Tony Danza but also stole the scenes from him.  As the series progressed the interplay between Danza and Groban became so slick that it really came across as they were a real father and son team.

The other characters aren't just window dressing.  They all have their own personalities and motivations that come to light as the series progresses and I really feel that if there were to be more episodes made that they would have become a lot more fully fleshed out but sadly Netflix appears to have cancelled it after just one season.  It's a real shame as the show was really starting to come to life in the final half of the season, especially with Danza's character.  There were some really poignant scenes that made me, as a viewer, want to know the the next chapter of their lives but sadly it wasn't to be.

Overall, if you're looking for an original cop show then this certainly isn't the show for you.  If you are looking for a funny, sweet but full of twists and interesting stories than definitely check it out, especially if you're a fan of Monk.