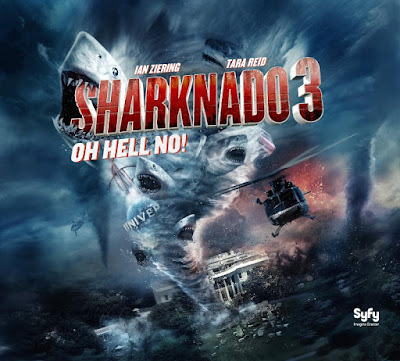 
Come on, let's be honest.  With the Sharknado movies, you know exactly what to expect.  Hell, you know what you're going to get when you know that a movie has been made by The Asylum.  Low budgets, wooden acting and a hell of a lot of fun.  Would we get that with this, the third installment of the Sharknado series, or has the well run dry?

You know what you're going to get with this movies.  The sharknado's that have been plaguing the world in the first two movies are back and this time they are even bigger than before.  Shepard is yet again tasked with stopping the sharknado and saving his family.  Again.  Some of the story does feel like a rehash of the first two movies but with such a short run time, you don't get a chance to get bored thanks to the sheer amount of fun that is included.

One of the most fun things with this movie is the sheer amount of people that made cameo appearances in this installment.  You have a wide range of people such as George R.R. Martin, Jackie Collins and Jerry Springer but then you have Jedward and a myriad of wrestlers such as Chris Jericho, Maryse and more.  Some of them die in hilarious ways and others are just there for a quick laugh but my favourite was by far the cameo for Penn and Teller.  It was absolutely brilliant to see them in it.  There are tons more in the movie but I could honestly be here all day listing them all there really is that many.

The cast here look like they are having an absolute blast making this movie.  It's almost like they know how cheesy and hokey the movie is so they're just going to enjoy the ride while it lasts.  I mean come on, it's a movie that cast Frankie Muniz (of Malcolm in the Middle fame) as a bad ass!

All in all, I'm in two minds about what to score this movie.  If I was scoring the movie on fun factor alone then it would definitely get a much higher score but let's be honest, it's not a good movie.  That's part of the charm of it.  It really is one of those movies that is so bad it's good.

If you like your movies that will have you howling with laughter at just how truly bad it is, then this is the movie for you, especially the ending that has to be seen to be believed.

Posted by Pat Scattergood at 14:14 No comments: