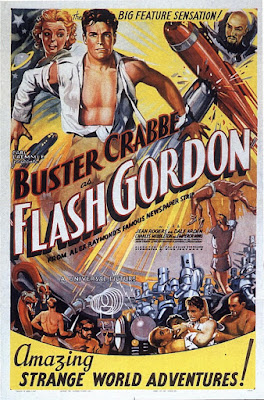 Based on the Comic Strip By
Alex Raymond

A rogue planet is 'rushing madly toward the earth.' Impending doom creates worldwide pandemonium. But maverick scientist Dr. Zarkov hopes to stay disaster by travelling to the new planet in his experimental rocket. Two chance-met strangers, athletic Flash Gordon and damsel in distress Dale Arden, go with him.

Arrived, the trio find Mongo to be a planet of wonders, warring factions, and deadly perils, its orbit controlled by Emperor Ming who has his own sinister plans for earth. Can our heroes, armed only with science and sex appeal, stop him?


As any reader of this blog will know, I'm a sucker for a good old fashioned black and white serial.  Especially those from the 1930's and 1940's.  Those were the decades where you got titles like Zombies of the Stratosphere, the Tarzan serials and more.  One of the most famous series of serials of the time were those of Flash Gordon.

Most of you will remember the 1980's movie that took it's inspiration from the original series of movies as well as the comic strip but here, we have a stripped down and classic kind of science fiction that you just don't see these days.

Modern movie fans may find these stories a little bit slow and simplistic at times but that's what makes them so endearing to the fans out there.  I loved the story and how each section would slowly build to a cliff hanger.  The sense of classic science fiction really did spring off of the screen in this one.  The famous characters are all here and they do superbly well to bring a sense of adventure as well as campy fun to the movie.

For me, Buster Crabbe will also be the Flash Gordon that I prefer.  He had the wholesome good guy act down to to an art form and this one is no different.  He also played the feeling of desperation that Gordon feels during the scenes superbly well.  However, there's one man here that steals the show for me and that is Charles Middleton as Ming the Merciless.  His subtle sense of menace really shines the brightest during the story and you come to see him get more and more desperate in his attempts to do away with Flash.

One of the things that I have always loved in films and serials from this time period are the costumes and the sets.  In Flash Gordon, they really outdid themselves.  It's true that they released various sets from the famous movies of the era but they dress them in such a way that some of them are near unrecognisable.  The costumes are utterly gorgeous and stunning to look at, which really shows the differing personalities and characters of the various people and races in the movie.

All in all, if you are a fan of the good ol' days of science fiction cinema, then this one is a must have and really should already be in your collection.