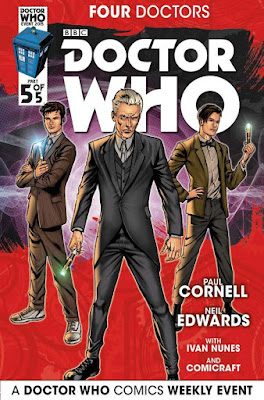 
What shocking past event brings three Doctors together — to combat an unknown foe with three incarnations in its sights?

Recently, Titan Comics have been doing a really good job of having ongoing series of the Tennant era, Capaldi era and Smith era of the long running character of the Doctor as well as a mini-series featuring the criminally underrated Eccleston era as well.  They all managed to keep the things that made those versions of the characters so popular yet managed to put their own spin on them.

That's when Titan Comics announced that there would be a big crossover event featuring four versions of the Doctor, hence the name of the mini series, but who would the fourth version be?

Well, after reading all five parts, the first thing that struck me was the simple fact that the story was more 'the three Doctor's' and not four because the fourth addition to the team was barely in it at all and I felt that was a little bit of a missed opportunity.  I would have loved to see that version butt heads with Capaldi for one as that would have been a battle of wits that would have absolutely flown off of the page.  A shame that it didn't happen really.

Other than that, the story itself is a rather interesting one.  It shows the characters in a different light and does a fantastic job of showing just how much of an emotional toll that it takes on the Doctor as well as the companions themselves.  That was a nice touch in between the various twists and turns that the story threw at the reader.

The art in these five issues is uniformly good for nearly the entire run.  There were a couple of panels where the detailing seemed slightly lacking but it really made the story feel alive and like it wouldn't be out of place in the actual television series itself.

All in all, this was a good crossover event.  I was a little disappointed that the fourth Doctor incarnation was barely used but at the same time, it was used in such a way that it really kicked the story off in an exciting manner.  I don't think that it was up to the normal high standards of the single series that Titan Comics do put out but it's still well worth a read.