The Osiris Ritual: A Newbury and Hobbes Investigation Review 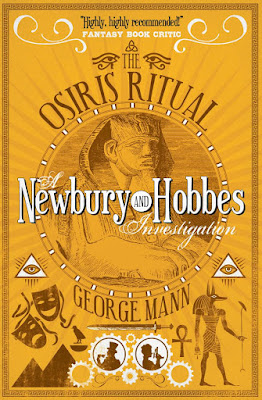 
Death stalks London and the newspapers proclaim that a mummy’s curse has been unleashed. Sir Maurice Newbury, gentleman investigator for the crown, is drawn into a web of occult intrigue as he attempts to solve the murders. And he soon finds himself on the trail of a rogue agent – a man who died to be reborn as a living weapon.

Meanwhile, Newbury’s able assistant, Miss Veronica Hobbes, has her own mystery to unravel. Young women are going missing from a magician’s theatre show. But what appears to be a straightforward investigation puts Miss Hobbes in mortal danger.

Can Newbury save his assistant, solve the riddle of the mummy’s curse, capture the deadly man-machine and stop the terrifying Osiris Ritual from reaching its infernal culmination?

As a massive fan of George Mann's work, I'm more than aware of his steampunk detective series.  In fact, I absolutely love the installments of the series that I have read thus far and always await new novels in the series.

With Titan Books re-releasing the series from the very beginning, I felt that it was a great time to revisit the characters and their adventures.  With the first novel, there were some moments that felt a little bit heavy due to the need to introduce all the main characters but here, with that out of the way, The Osiris Ritual is a much more streamlined affair and the book that actually introduced me to Mann's almost lyrical writing.

One of the things that I have always liked about The Osiris Ritual is the simple fact that everything, including the story, really seems to have been ramped up by Mann.  There are lots more twists and turns, the villains seemed more vile and evil and there were some absolutely fantastic bits of character development too.

With this mystery combining a sense of the supernatural and some almost Sherlock Holmes style mental mathematics, the story moves along at a really fast pace but with Mann leaving enough space for the characters to grow and develop, this second novel in the series really shows Mann firing on all cylinders story telling wise.

All in all, this is, in my opinion, the best of the Newbury and Hobbes series by far and really shows a series that is full of twists, turns and surprises.  Well worth picking up.