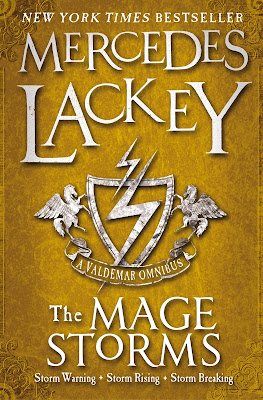 
Karse and Valdemar have long been enemy kingdoms- their peoples filled with mutal prejudice and mistrust. Only the vile deeds perpetrated on both kingdoms by Ancar of Hardorn, and the subsequent emergence of the armies of Eastern Empire in the wake of his defeat, have forced these two so-different lands into an uneasy alliance.

For the Eastern Empire, which has long been isolated and shrouded in mystery, is ruled by a monarch whose magical tactics may be beyond any sorcery known to the Western kingdoms.

Forced to combat this dire foe, not only must traditional enemies unite, but the Companions may, at last, have to reveal secrets which they have kept hidden for centuries... even from their beloved Heralds.


I've been a fan of the novels by Mercedes Lackey for a long time and her world building skills in her stories are second to none.  That skills is the most true for series of books set in the world of Valdemar.

The novels  that have been set in that world have been thrilling and exciting for fans of well paced and well written fantasy adventures.  With Titan Books releasing the best selling novels Storm Warning, Storm Rising and Storm Breaking as part of this omnibus, I was excited to revisit that world.  So let's take a look at the three novels shall we?


The one thing that struck me straight away about this first entry in to the trilogy is that the pacing for this one seemed a little off.  I normally love the slow build that Lackey is famous for because there seems to always been a very good pay off that makes that slow build worth sticking with.  Here, that didn't seem the case if I'm completely honest.

The story itself took a long time to get going but when it found it's second gear, it seemed to almost be in a rush to get to the end of the first installment.  I found that a bit disappointing in that the characters seemed to be slowly growing in to their adventure and then it seemed to be largely forgotten and they became less interesting.

Story wise, it was fine and there were some good moments that kept me interested and even made me want to read on to the second installment but largely, I think this was one of the weaker installments for the Valdemar series.


The second book in the trilogy started off a little better that the previous Storm Warning story but then promptly fell in to the trap of having largely uninteresting characters.  It seemed like the pacing was a little off as well because of the fact that as soon as anything would happen that would spark my interest, they went in to the whole introspective side of the characters.  I don't mind this happening every now and then as it normally leads to some good character development in Lackey's stories but here it not only seemed to derail the momentum that the story had built up but also didn't seem to have all that much of an effect on the  characters themselves.

Story wise, it was a little better than Storm Warning and there were some great moments of excitement but they seemed to be few and far between and that's a real shame because it nearly put me off of reading the third and final part of the trilogy and I've never had that with Lackey's work before.

Well, here we are at the conclusion of the trilogy.  The first two installments have been a bit disappointing but here, Lackey kicks it up a gear.

The story itself seems to have been really found a good pace for the final installment and a lot of the pieces seem to have come together nicely for this finale.  A lot of the focus is taken away from the main characters in the first two novels and that brings forward some new characters as well as some old favourites.  That really felt like a good move because it gave the story a lot more depth than in the other two installments.  However, that did lead to a couple of parts feeling a little bit over crowded and busy.

With this book, Lackey does tie up some of the loose ends very well and even concludes a lot of her longer running story arcs in a manner that will please a lot of her fans.  That said, there were a couple of conclusions that felt a little out of place and that they were just put in there so that she hadn't missed any but for the most part, this was a much improved book in the series.

The one thing that I think hurt the book was the hurting.  It seemed altogether too sudden and like there should have been a lot more to the ending than there was and that's a shame because I enjoyed this one a lot more than Storm Warning and Storm Rising.


Overall this trilogy had some really well thought out moments and some rather disappointing ones but with someone as prolific as Lackey, that's to be expected.  It's a bit of a shame that this one was so disappointing because I'm a big fan of the world that she has created here and the conclusions for a couple of the characters seemed a little rushed.  That said, if you are a fan then this is still worth picking up despite there being better installments in the series itself.