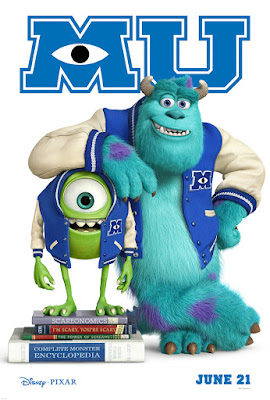 Mike Wazowski and James P. Sullivan are an inseparable pair, but that wasn't always the case. From the moment these two mismatched monsters met they couldn't stand each other.

"Monsters University" unlocks the door to how Mike and Sulley overcame their differences and became the best of friends.

When it was announced that there would be a sequel to Monster's, Inc after more than a decade, I was curious as to how it would work.  Especially after the original movie had ended in such a beautiful and perfect way.  Well, that was easy.  The movie wouldn't be a sequel, it would be a prequel.

Disney and Pixar have long had a really productive and successful relationship but even them making a new movie with some of their best characters seemed like it might be a step too far.

That said, Monsters University is one of those movies that completely took me by surprise.  When you look back on their other sequel called Cars 2, a movie that didn't even remotely come close to the fun of the original, this one is a movie that really shows that movie how to do it right.

The story itself is a rather interesting one if you are a fan of the original movie.  It may not be the most original story in that it shows how the two main characters became friends but they handle it in such a deft manner that it comes across as really heartfelt and charming.  Some of the popular characters make an appearance too and the new additions to the cast really do help to bring the story to life for the viewers.

During the story there are many jokes and moments that will keep the little ones more than hooked all the way through it but there are also some superb moments for the mums and dads that are watching alongside their little ones.  I've always loved it when a family movie manages to do that and this one does it very well.

Cast wise, this is honestly one of the strongest Pixar movie casts that I have seen in a long time.  Their performances really do mesh incredibly well and it really does sound like they're having a fantastic time.  The addition of Helen Mirren to the cast was an inspired choice, she really does give the story not only a touch of class but also a very strong and interesting take on her character of Dean Hardscrabble.  I also loved the addition of Nathan Fillion, one of my favourite actors, as the character of Johnny.  He sounded like he was having a great time hamming it up and coming across as a cocky and unlikable character.

All in all, this was a brilliant prequel to one of my favourite Pixar movies.  I'll admit that it doesn't quite match the sheer brilliance of Monsters, Inc but it does come very close.  At the heart of the movie is a story of friendship, belonging and, at times, bravery.  The team here really took that idea and gave us a very sweet movie that managed to handle the story without feeling saccharine and melodramatic.  Definitely one that the family will want to watch and rewatch.

Posted by Pat Scattergood at 01:38