The Avengers: Age of Ultron Review 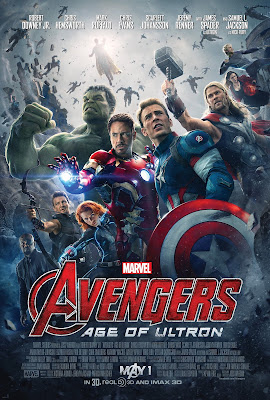 Based on Characters Created By
Stan Lee
Jack Kirby

When Tony Stark tries to jumpstart a dormant peacekeeping program, things go awry and Earth's Mightiest Heroes, including Iron Man, Captain America, Thor, the Incredible Hulk, Black Widow and Hawkeye, are put to the ultimate test as the fate of the planet hangs in the balance.

As the villainous Ultron emerges, it is up to the Avengers to stop him from enacting his terrible plans, and soon uneasy alliances and unexpected action pave the way for a global adventure.

When the Avengers Assemble movie directed by Josh Whedon burst on to the cinema scenes, it brought the team to life in a mass of explosions and alien invasions.  That left me wondering how he would top that fantastic movie debut for the team.

Well, after I've seen this sequel, I was impressed to see that he didn't try to top that one in terms of balls to the wall action.  Instead we get to see a lot of character development for the team, expecially in the shape of Hawkeye, and that leads to the viewer really getting in to the mission that they were going to have to throw themselves into.

There were a lot of links to the previous Marvel movies and I loved the simple fact that while they keep them all connected, they all seem to work very well as a stand alone movie as well.

While it was nice to see how the actors have really given the characters a lot more depth in this sequel, the movie most definitely belongs to the wonderfully menacing performance by James Spader as Ultron.  One moment he comes across as a major threat, one that the team may not even come remotely close to defeating and then the next, he comes across as a sulky teenager.  I loved the mix of personalities that came through in the performance and that even lead to some scenes where you can almost feel some form of sympathy for the character despite the fact that he is trying to wipe out the world.

The addition of the characters of The Vision, The Scarlet Witch and Quicksilver were very well done as well and they were great characters to have in this movie.

The one thing that bothered me about this movie was the simple fact that despite there being some absolutely amazing moments for the characters, moments where the action sequences just completely blew me away as well as some great performances, something felt like it was missing yet I couldn't place my finger on what.

That said, this was a very good installment in the Marvel world and one that is well worth watching.  Not only did it wear it's links to the previous movies with pride, it's also set up the next slate of movies to come.

Posted by Pat Scattergood at 08:35