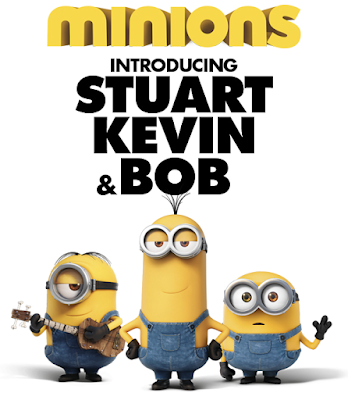 
The story of Universal Pictures and Illumination Entertainment's Minions begins at the dawn of time.

Starting as single-celled yellow organisms, Minions evolve through the ages, perpetually serving the most despicable of masters. Continuously unsuccessful at keeping these masters - from T. rex to Napoleon - the Minions find themselves without someone to serve and fall into a deep depression. But one Minion named Kevin has a plan, and he - alongside teen-age rebel Stuart and lovable little Bob - ventures out into the world to find a new evil boss for his brethren to follow.

The trio embarks upon a thrilling journey that ultimately leads them to their next potential master, Scarlet Overkill (Academy Award winner Sandra Bullock), the world's first supervillainess ever.

They travel from frigid Antarctica to 1960s New York City, ending in modern London, where they must face their biggest challenge to date: saving all of Minionkind...from annihilation.

After being such a huge fan of the two Despicable Me movies, I have to admit that I was a little bit conflicted when they announced that they were going to make a spin off movie that focused solely on the little yellow Minions.  It's true that they work very well in small doses and that they are definitely popular because of the simple fact that they can pop in, cause chaos and then go off to do their own thing again.  Would that successful formula be able to be sustained through an entire movie?

The movie itself is quite a funny one and there are some absolutely brilliant moments that had me in hysterics yet something felt missing and the jokes really did start to fall a little flat near the end.  It was almost as if the writers themselves had run out of funny lines and were just going through the motions.

Don't get me wrong, Minions is still a very funny movie, it's just that it felt a little forced at times and some of the blame of that has got to fall at the feet, or rather lips, of the voices used.  The cast really did feel like a very mixed bag of performances.  That said, Michael Keaton did sound like he was having an utter blast of a time as the character of Walter Nelson.

That said, Sandra Bullock seemed like a bit of a strange choice for the 'big bad' of the movie.  Her voice just didn't seem to really fit that of the character of Scarlet Overkill that well.  Some scenes were very well done and others felt like she was just really not feeling the lines.  I really did enjoy the choice of Geoffrey Rush as the narrator though, his voice really fitted in well with the story.

The story itself is an interesting one but it didn't really feel like it was all that needed.  It's a bit of a weird one to rate in that while it was entertaining for what it was, it just didn't feel like a movie that I needed to see.

However, if you have some little ones that like the little yellow fellows then you could do a lot worse than this movie and there are some very good moments of humor but also of some very heartfelt moments too.  One of the things I did like about the movie were the links to real life people and the use of the songs of the time period.  That, I felt, was a nice touch.  Personally, I think I'll stick to the Despicable Me movies.