The King in Yellow Review 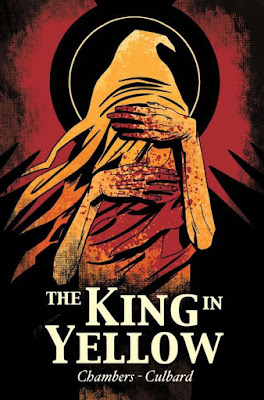 Based on the Novel By
Robert William Chambers

"Strange is the night where black stars rise, and strange moons circle through the skies..."


The King in Yellow: a play that brings madness to all who read it.

Irresistible and insidious, it lures the reader with its innocence and dooms them with its corruption.


"...But stranger still is Lost Carcosa."

Self Made Hero are one of those sorts of publishers that always seems to choose the right works to adapt and with their long list of adaptations that include work by people such as H.P. Lovecraft and others, I'm always eager to see just what will be coming up next from them.

The King in Yellow has a massive reputation behind it.  The original story by Robert W. Chambers has long been considered a masterpiece, almost even a master class in story telling and suspense building.  When it was announced that it would be joining the ranks of adaptations by Self Made Hero, I have to admit that I was a little bit worried that they might have bitten off more than they could chew with this one.

Well, that fear was most definitely unfounded.

The things that made the original by Chambers so effective and shocking are all here and accounted for but with Culbard's subtle skill at storytelling, they have really put a new spin on the story but done so without losing any of the originals effectiveness.  Culbard's adaptation of Chambers' writing is not only masterful in it's own right but manages to stay true to Chambers' style but does so with a touch of class and a bit of class as well.  Culbard's highly effective style gives the characters a whole new life and really sucks the reader in to the various connected tales here.

A lot of the success of this adaptation is not only down to the writing by Culbard but the art work too.  In equal parts stunningly beautiful and full of dread, the art not only does the story justice but also gives it new layers that it uses to sink its claws in to the reader.

One of my favourite parts of this graphic novel is quite simply that the art has an almost other worldly feel to it.  Kind of like you are watching it unfold in front of your very eyes but you still feel slightly disconnected from it as well.  That leads to the stories feeling unsettling and creepy in equal measure.

I have to admit that while the original wouldn't be to the tastes of every reader out there, I urge you to search it out and find it.  Then you need to grab this adaptation.  It's masterful, effective and quite frankly, Culbard's best work, which considering the sheer quality of the work he has done before should tell you just how good this one truly is.