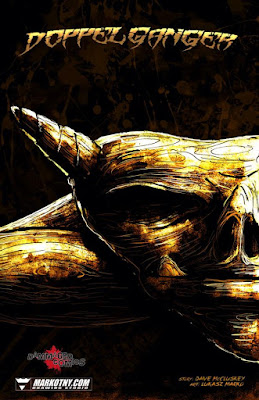 Art and Cover By
Lukasz Marko

Doppelganger tells the tale of Tom, who takes a fancy to a mirror he spots in an antique shop, but then things start to change as the mirror starts to take a fancy to him.

David McCluskey, from Dammaged Comics, has a knack of writing stories that can really creep under your skin and stay with you long after you have closed the cover.  In fact, he manages to do so in a variety of different ways ranging from the rhyming stories in the Interesting Tymes series of stories right through to the supernatural horror of Wooden Heart.  That's the mark of a good writer and that is something that McCluskey definitely is but where would this new release slip in to the scheme of things?

One of the things that struck me the most about this release was the slightly unusual art work.  From the striking cover through to the interior art, Marko's art really keeps your eye on each and every panel no matter how horrific the scene is and for this title, that works extremely well and is one of the main reasons that the story really stabs its claws in to the reader and doesn't let you go.

All through the story, the art really does give the story a dark, disturbing edge and because of that I would have to say that this title wouldn't be for everyone out there.  Some of the things that happen in this title will shock you and really will stay with you after you have finished the story and some of that is down to the dark and almost grimy looking art.

With such powerful art, the story was going to have to be absolutely top notch and that's exactly what we have here.  The story itself is horrific in places and McCluskey really has outdone himself with this release.  I have to admit that after reading his other releases, the sheer brutality in some of the scenes here did take me a little by surprise.  That said, he really has a style that can best be described as short and to the point.  There's no beating around the bush here, as the saying goes, and because of that the story has a real punch to it.

I have to admit that this one is quite a hard title to rate.  On one hand, it's a very well written and very well drawn release and one that I would recommend for fans of horror with a supernatural slant to it.  On the other hand, it has quite a unique style so that may end up putting readers off but personally, I think it's an accomplished and interesting release.