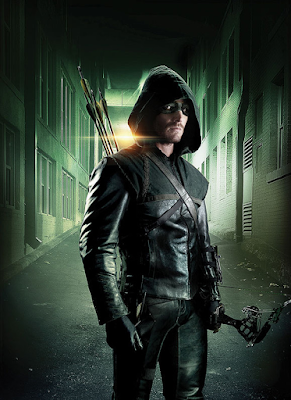 Based on the Characters Created By
DC Comics


In the aftermath of his victory, Season Three opens with The Arrow now a hero to the citizens of Starling. Crime is down, people feel safer, and Captain Lance even calls off the Anti-Vigilante Task Force.

Basking in his success, Oliver believes he can finally have a private life and asks Felicity out on a date. But the second Oliver takes his eye off the ball, a deadly villain reappears in Starling, forcing Oliver to realize that he can never be Oliver Queen – not as long as the city needs The Arrow.

After the heights of the first two seasons, season three of Arrow was going to have to be absolutely brilliant in order to match that but is that what the fans got?

After watching this season one thing struck me the most.  The whole season seemed very uneven.  Just when there would be a couple of fantastic episodes in a row, you'd then get one that fell flat and that momentum would be lost.  That's the case in a few of the recent superhero shows that are coming out recently but most evident here.

Story wise, the season sounded brilliant on paper.  Ra's al Ghul turning up to make Queen's life hell sounded like it would be an absolutely gripping story with a massive scope for character growth for the characters involved yet here, we got a season where a lot of the characters seemed to do a complete 360 personality wise or would make decisions that would go completely against everything that had been set up in the first two seasons.

That fact is made even more sad by the simple fact that the season really started with a shock.  A tragedy came out of nowhere and left you wondering just where the characters could go from there.  As a fan that really had me on the edge of my seat but the episodes that followed didn't really seem to match that.  At best there were some brilliant additions to the cast and some familiar faces from the comics made some fantastic appearances.  I've always loved how some of the background characters and people that would get involved in Queen's life wouldn't always been the best known characters but it would then give them a chance to shine and that's always been one of the strengths of this series.  At worst, the series just seemed to resort to some shocks just for the sake of having a shock wedged in there.

All in all, the series wasn't terrible nor was it as bad as the critics have said.  It was a bit disappointing and I didn't really like the simple fact that the characters seemed to be going out of their way to be different from the first two series.  I think that the sense of danger that the first two series had was lost because it seemed so close under the whole 'will they or won't they' between Oliver and Felicity.  That's a bit of a shame because on paper, the series sounded like it should have gripped and excited the viewers.

This season is still worth checking out because the good episodes were very good but don't expect it to be as gripping as the first two seasons.  I'm kind of hoping that they try something a bit different with season four because the whole city wide threat has now been done three times in a row and has become a little bit expected now so fingers crossed.