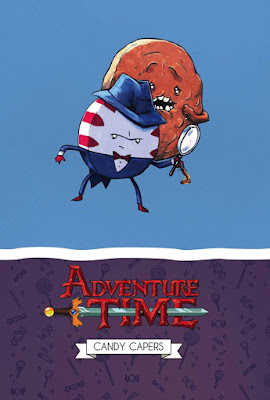 
Finn and Jake are missing?!

It's a dark day in Ooo, but fear not, Candy Kingdom - Peppermint Butler and Cinnamon Bun will...protect...you?

Desperate times call for desperate measures and Princess Bubblegum has no choice but to turn to the gummiest of gumshoes.  Peppermint Butler is on the case, and will Cinnamon Bun's complete lack of keen detective skills, they just might have a chance at navigating Ooo's shadowy underbelly and locating everyone's favourite heroes...


As a fan of the iconic television show Adventure Time, I've been really impressed with some of the comic books from Boom Studio's that have been coming out recently.  They've really captured the feeling and the almost anarchy like sense of fun that the series have,

Here, the Candy Capers collection from Titan Books have taken a fun mystery tale and told it from the perspectives of some of the other characters in the world created by Pendleton Ward.  The majority of the tale is told from the p.o.v of Peppermint Butler and Cinnamon Bun but we also get appearances from characters such as Lumpy Space Princess, Marceline and more as they set out to discover just what has happened to the missing Finn and Jake.

The art used in the collection from the likes of Ian McGinty, Tessa Stone and Evan Dahm is bright, colourful and vibrant to the point where it almost feels like an animated show itself.  In fact, the art really captures the things that make the series so much fun and enjoyable to watch.  The action that unfolds on the page really does have such a sense of energy that you can't take your eyes off the page.  A lot of the fun of the art is the sheer amount of detail that has been put on to each page.

Story wise, each installment really does do a great job of feeling like episodes of the show.  I know I keep mentioning that but the fact that they have nailed such a unique show and made it come to life on the page is one that really pleased me as a fan.  They characters come across exactly how they would on the television and the story itself moves along at a cracking pace with one liners and jokes firing off in all directions.  There are even some fantastic shots at the mystery and detective genres thrown in for good measure that really had me laughing.  It's true that with the amount of jokes coming from the story that there are some that fall a little flat in places but it doesn't take away from the enjoyment at all.

All in all, Candy Capers is the sort of release that, if you are an Adventure Time fan, should already be in your collection.  I have to admit that if you aren't that big a fan of the show itself then this one will probably pass you by.  I, for one, absolutely loved it and had a fantastic time sharing it with my little lad.