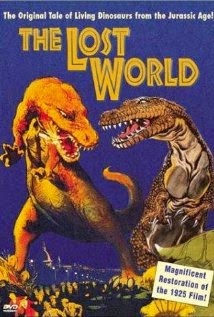 Based on the Novel By
Sir Arthur Conan Doyle


The Lost World created a worldwide sensation when it opened in 1925.

When romance threw down the gauntlet to Edward Malone, not only did he realise another young woman's dreams and open the door to Professor Challenger to take a party deep into the unforgiving Brazilian jungle, he found himself in terrifying danger. in a pre-historic time, with no hope of escape.

Professor Challenger - ridiculed for his speeches on living dinosaurs and desperate to prove their existence, engineers the expedition with Malone to rescue Paula White's father (previously stranded on the plateau) and to further his research and show the mocking dis-believers that dinosaurs do still exist after all.

This amazing film, originally believed to have been destroyed or lost forever, has been stunningly restored using a mixture of reconstuction techniques.  The outcome is of a remarkable richness.


One thing that strikes me the most about silent movies is the simple idea that while they are hugely influential, even today, on modern movies, they have been treated and mishandled in shockingly bad fashion.  That's no different with this all time classic.  Without this movie, there would be no Jurassic Park or King Kong, it really is that simple yet the prints were destroyed, cut / edited in massively bad fashion and even lost for decades.

With so many versions of this movie floating about, some of varying lengths and others that were such bad prints that they are nearly unwatchable, I was wondering which would I would have ended up with when I saw this one in a charity shop for next to nothing.  Well, the answer to that is I ended up with a fantastic one.

Not only is this print as full a version of the movie as you can possibly get with it running at 93 minutes long, the transfer itself is very well done.  For a movie that is 90 years old, the scratches are minimal, the picture very clear in most of the movie and really gives new life to an absolute classic of a movie.

While it is true that the silent nature and slow pacing of the movie will put off viewers that are more used to 'more bang for their buck', you really shouldn't disregard this movie at all.  It's exciting, there are some beautifully simple performances and, considering it was made in 1925, some impressive special effects.  You can actually see as  the movie goes on that the team that created the dinosaur effects were growing more confident because in the beginning of the movie their movements are quite jerky and sudden yet by the end of the movie they're smooth and look utterly incredible.  The best scene of this is near the end involving a dinosaur and the city of London!

There are some really surprising special effects here on the DVD as well.  We have the traditional music accompaniment by Robert Israel as well as an alternative one by The Alloy Orchestra, commentary with Ray Pilot and even some more.  I don't want to list them all here because they were a wonderful surprise to me when I saw them so I hope you enjoy them too.

If you are a fan of silent movies or classic movies in general, then I urge you to hunt yourself down a copy of this one and watch it.  It really has a sense of excitement, wonder and charm of it's own and like I said earlier, without a movie like this one then there would be no King Kong or Jurassic Park for the modern audiences to sink their teeth in to.  This movie really is that important!