What We Do in the Shadows Review 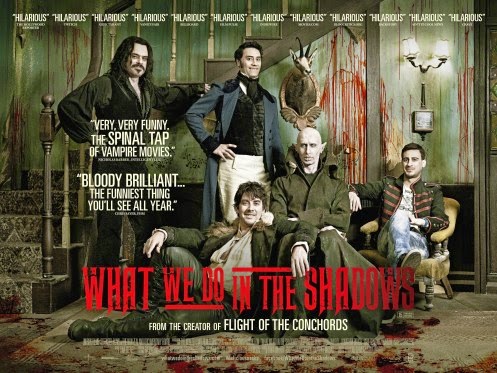 This hilarious mock-documentary, featuring Taika Waititi and Flight of the Conchords' Jemaine Clement, details all the comic complexity that arises from such difficult living (or not living) conditions.

A young new initiate who won’t stop telling people how cool it is to be a vampire adds to the supernatural chaos.


Vampires, mockumentary and a horror comedy hybrid.  Three things that in theory shouldn't work because of how tired and over used they are as movie making tools.  Yet here that's not the case.

Vampire comedies have been incredibly popular lately and because of that, the genre has been over crowded massively.  Some have been really good and others have been down right awful.  What We Do in the Shadows is one of those movies that fits in to the first camp and does so with a large amount of flair and skill.

I have to admit that the mockumentary genre is one that doesn't really interest me massively.  I love films like This is Spinal Tap but for the most part, the movies just come across as feeling forced and unfunny.  What We Do in the Shadows not only hooked me in for the entire movie but also felt like you were really watching the story unfold in front of you.

Taika Waititi and Jemaine Clements have not only written and directed a very funny tale of just what it would be like to be a vampire just wanting to live a simple life, but they also perform as two of the characters and really make them feel completely real.  In fact, Clements performance actually came across as a funny version of the Gary Oldman portrayal in Bram Stoker's Dracula.

One of the things that really interested me the most was the simple fact that not only do the jokes come thick and fast but there is also an emotional slant to the movie too, even bordering in to tense territory when the new arrival moves in.  I loved the simple fact that they were able to straddle such different styles but did so in such a way that it felt original, hilarious and touching.

With some great special features such as deleted scenes, interviews, behind the shadows, video extras and promo videos, this is a great all round release from those folks at Metrodome.

All in all, this is a movie that really deserves to be seen by a lot more people than it has been.  This is a funny, well written movie with some absolutely fantastic performances and moments that will have you howling with laughter.  Just watch out for the sandwich joke, that will literally have you spitting your drink over yourself from laughing so much.

What We Do in the Shadows is released to buy on April 13th.

Email ThisBlogThis!Share to TwitterShare to FacebookShare to Pinterest
Labels: Comedy, Flight of the Concords, Horror, Jemaine Clement, Mockumentary, Movie, New Zealand, Review, Taika Waititi, Vampire, What We Do in the Shadows