Tinker Bell and the Legend of the Neverbeast Review 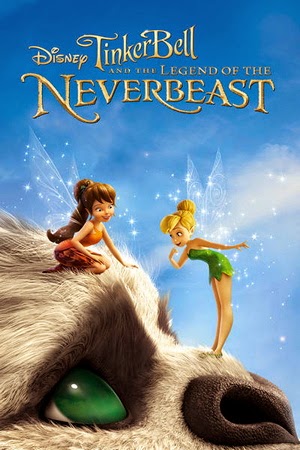 
Fun and talented animal fairy Fawn believes you can't judge a book by its cover, or an animal by its fangs, so she befriends a huge and mysterious creature known as the NeverBeast. While Tinkerbell and her friends aren't so sure about this scary addition to Pixie Hollow, the elite Scout Fairies set out to capture the monster before he destroys their home. Fawn must trust her heart and take a leap of faith if she hopes to rally the girls to save the NeverBeast.


I have to admit that the Tinker Bell series of movies, while entertaining my son massively, have been quite hit and miss.  I did enjoy the ending of Tinker Bell and the Pirate Fairy as it managed to tie in nicely to the Peter Pan movies however.  As my son had been asking to see this one over and over we decided to give it a go.

After having watched this one, I was actually blown away by the movie itself.  In fact, I would even go so far as to say that I was shocked that I enjoyed watching this one with my lad so much.

The story itself may not sound all that original but the writing really raises it much higher than some of the other installments in the series.  They take a well worn idea and make it in to a well thought out, touching and heart felt story of understanding, kindness and more.

The thing that appealed to me the most was the simple fact that the cast really seem to me a lot more motivated for this movie.  The best performance by far is that of Ginnifer Goodwin, who voices Fawn.  With the story itself having Tinker Bell take a back seat to the character of Fawn, there had to be a very strong vocal performance for the movie to rest on and Goodwin more than brings her 'a' game to this one.  Also with this being her first appearance voicing the character, I was expecting her to feel a little out of place amongst the long standing cast but she does such a good job that it felt like she had always been playing Fawn.

One of the things that struck me the most was the simple fact that I was really not expecting the movie to have the emotional punch that this one had.  There were a couple of moments that had my lad close to tears and I'm not ashamed to admit it that I did actually well up at the ending.

With such gorgeous animation, some great vocal performances and an unexpected, emotionally involving story, The Legend of the NeverBeast is definitely one of the best, maybe even the best, installment in the long running series.  When the movie ended, despite it's rather emotional ending, my son wanted to watch it again straight away.  You can't ask for more than that from a family movie really.