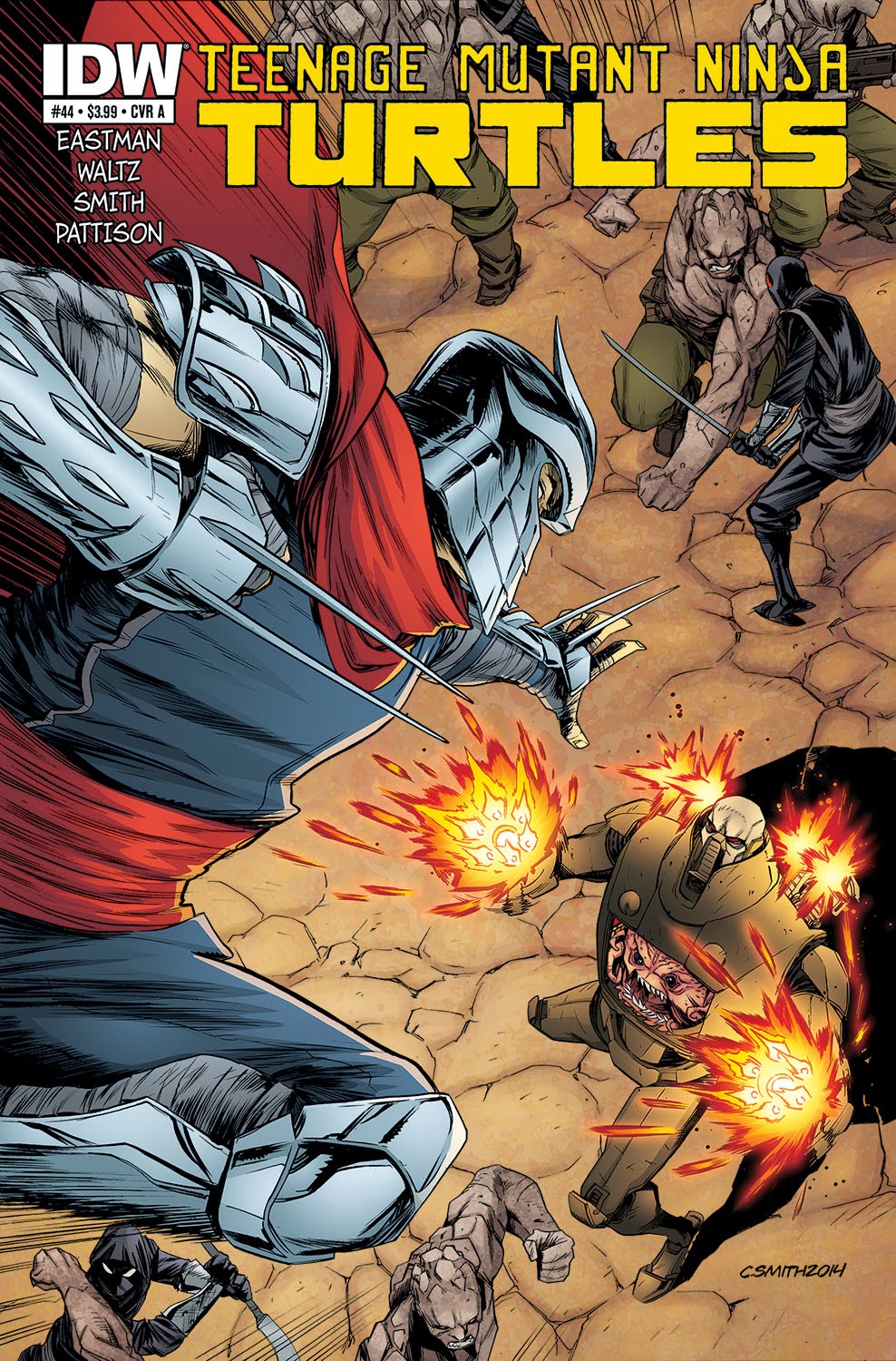 
The Technodrome has just activated, set to destroy all life on Earth.  Shredder, who was transported to Burnow Island along with his forces by Donatello, is nearly killed by Krang and his army.

Meanwhile the other Turtles struggle to get past Baxter's flyborgs to stop Krang and the Technodrome.


When the Teenage Mutant Ninja Turtles first burst on to the scence, their gritty and sometimes satricial stories really hooked in the readers and that lead to toys, movies and an animated television series.  With each new installment, they seemed to get more and more watered down.

With this, the 44th issue, a lot of that comes to a head with some very sharp and emotional writing.  The story of the Technodrome has been an exciting one and there have been times where, despite being so used to the Turtles winning their battles, this one really has felt like they could fail on any given moment.  I loved that sense of urgency and even dread that ran through the issue.  The tension really hooked me in and you couldn't help but just will them on.

Issue 44 is the last in the Technodrome storyline it seems but I really feel like it's a tale that is going to be felt throughout the rest of the series for a long time.  There are twists, turns and revelations galore here but that's not it.  The writing leads up to a very tragic twist for one of the main characters and the emotional punch of it even gave me a lump in my throat.

The art here really gives the sense of urgency and dread a life and really makes the story fly off of the page.  It really comes in to it's own on the battle scenes where even though the action is frantic and busy, not once did it feel like there was too much on the page.  Instead, the detailing and the colour work really tie in together brilliantly and really draw your eyes to each and every panel.  That's when the shock hits and when it does, the art gives you the knock out punch.

If you are a Turtles fan then you WILL need to get this issue at any cost.  Hard hitting, emotional, exciting and even heart breaking, this is definitely not the Saturday morning cartoon that has become the norm for these characters.  This is a hard and gritty issue that is going to have some serious ramifications on the rest of the characters and I, for one, eagerly await issue 45 to see where they are going to take this story next.