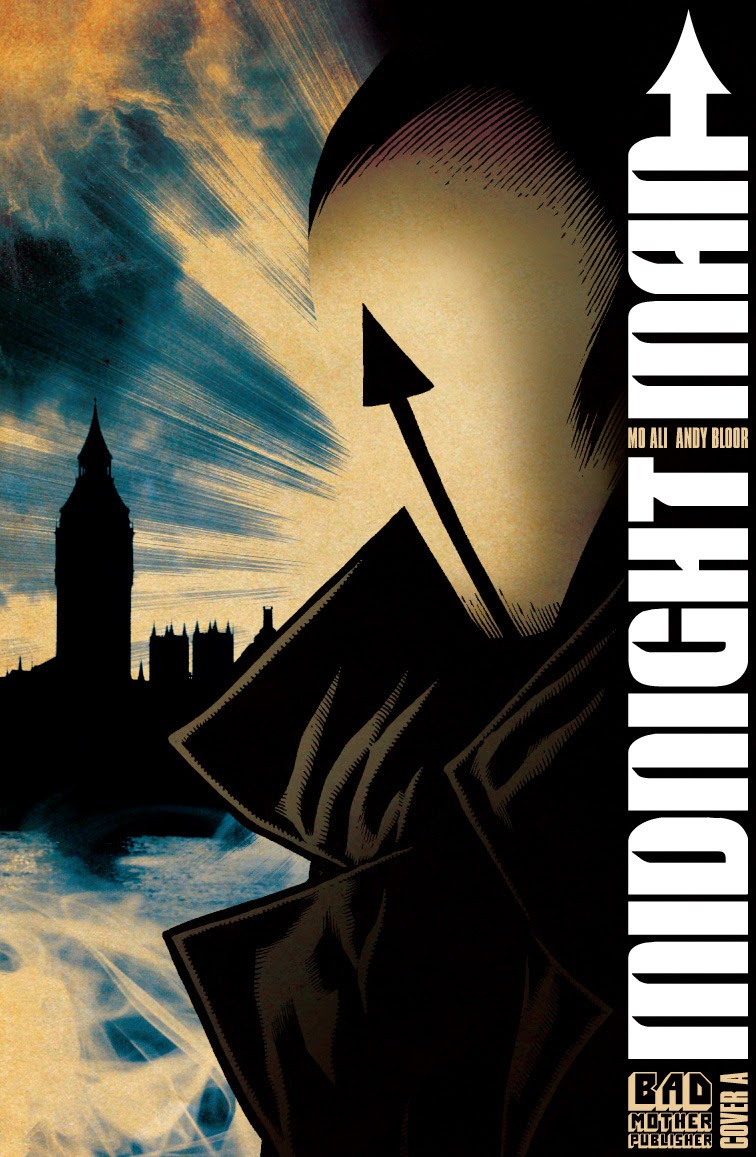 
Falling from Big Ben while being chased by a possessed horse from the American Civil War, the time-travelling vigilante Midnight Man has had stranger days.

Can he foil the plans of a malevolent time-spanning cabal, and save humanity in the process?

He might be out of luck, he's possibly out of time, and he's definitely out of his mind.

Get ready for some TEMPORAL. BULLET. ACTION.


When you hit the first page of this title from Mo Ali and Andy Bloor, not a single second or panel is wasted as you are quite literally thrown in to the thick of things as the action quite literally has exploded in front of you.

The thing that I loved about that first page is that you read it and think "what the fu*k is going on?" and it gives you an urge to absolutely devour the book to get to the bottom of what the character and story is about.

The fact that you know next to nothing about the main character works really well in this case because you honestly don't know if he's acting crazy or if he is quite literally insane as he goes about his mission to stop the cabal's evil plan.  The best way to describe the character is if Deadpool and Bruce Campbell somehow managed to have a time-travelling baby and that doesn't even come close to a full picture of him.

Midnight Man is one of those characters where you really have no idea just what he is going to do or say next and that makes this book both interesting and funny as hell at the same time.  When the action hits, and boy does it hit hard, there are punches, kicks and gunshots all flying next to the random as hell quips from the main character.

A lot of that is down to the writing of Mo Ali, who gives the story a lightning quick pace that doesn't let up for one moment.  I think the best way to describe this would be that the story is total and utter anarchy and all the better for it.  Alongside Andy Bloor's stark but busy art, the character really does come to life and you can't take your eyes off of him.  Throughout the story, the art and story combine so well that it's almost as if you are watching a really messed up, in a good way, animation.  I, for one, would definitely be first in line if this story ever turned in to an animated adventure for Midnight Man.

If you want a character with loads of character development and high brow story then you might be in the wrong place.  However, if you want a fun, fast paced and hilarious story then this one is well worth picking up.  There's even a superb pin up done by Martin Stiff, one of my favourite artists too so personally, this is is one that I will come back to time and time again.

Also keep an eye out for an appearance by Maggie Thatcher too!