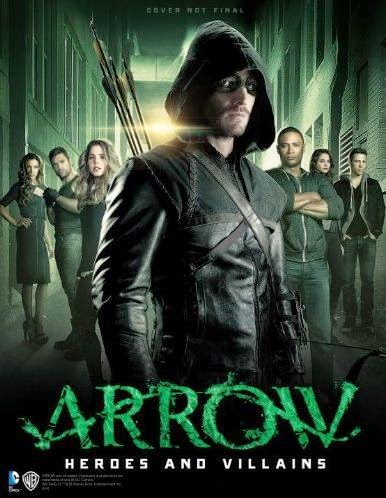 
Arrow - Heroes and Villains is a companion to the hit Warner Bros. TV show Arrow, to be airing its third season on The CW network. Based on the DC Comics character, the American TV series Arrow follows billionaire Oliver Queen (Stephen Amell - Heartland, Private Practice) who, after spending five years marooned on a remote island, returns home and secretly creates the persona of Arrow to right the wrongs of his family and fight the ills of society.

Arrow - Heroes and Villains is a comprehensive character guide to the hit Warner Bros. TV show Arrow. Featuring in-depth character breakdowns of Oliver Queen - the billionaire turned hooded vigilante, Laurel Lance - attorney and former girlfriend of Oliver, Slade Wilson - the character based on DC Comics' Deathstroke - and many, many more.


Titan Books have got a great history of giving us fans some truly brilliant tie in books recently ranging from their books that have sprang from television shows such as Fringe as well as their art books looking at things as varied as Dead Space and Cloudy With a Chance of Meatballs 2.  With such a popular show as Arrow however, Titan Books needed to give us a book that would not only thrill the long term fans but also prove an asset to the newcomers.

Well, with Arrow: Heroes and Villains, they have given us a fantastic tie in book that looks at each and every character that has thus far appeared on the show but it's not just a quick look at each person.  Instead it's an indepth look at everyone from the major people like Oliver Queen right up to bit part players.

Personally, I found myself really interested in the back stories of the characters and the way that this book has been written really made it one that you can easily pick up and look at any character you want and still be hooked in.  A lot of that is down to the flow and pacing of the writing itself but it's that writing that gives me the feeling that Aires is either a big fan of the show or one that at the very least holds the characters in high regard.

Another part of the book that I liked the most was the fact that they not only combined the history of the characters in the show but they also had a section in the book that told us about whether they were an original character created for the show itself or whether they were a character taken from the comic books themselves.  That not only interested me as a fan of the show itself but as a comic book fan, I felt that was an absolutely brilliant touch.

If you are fan of Arrow as a television show or even just of the character himself, this is definitely an interesting, well written and essential book for the any fan of the comic book world.