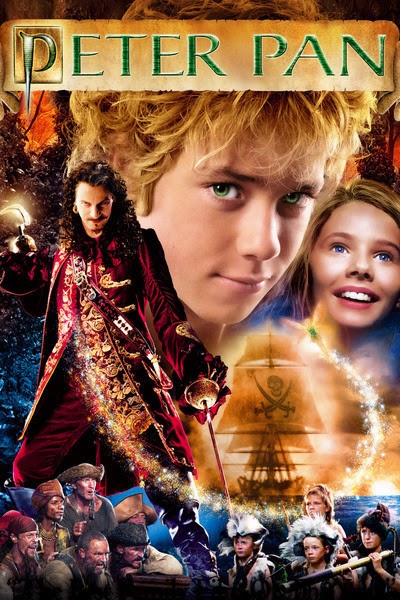 Based on the Play and the Books By
J.M. Barrie


In stifling Edwardian London, Wendy Darling mesmerizes her brothers every night with bedtime tales of swordplay, swashbuckling, and the fearsome Captain Hook. But the children become the heroes of an even greater story, when Peter Pan flies into their nursery one night and leads them over moonlit rooftops through a galaxy of stars and to the lush jungles of Neverland.

Wendy and her brothers join Peter and the Lost Boys in an exhilarating life--free of grown-up rules--while also facing the inevitable showdown with Hook and his bloodthirsty pirates.


Since being read some of the stories while growing up, I've always had a bit of a soft spot for the various versions of the Peter Pan stories.  I've seen a great many movie versions, mini-series and even different book versions of the extremely popular tale by J.M. Barrie.

When I read about this movie, I have to admit I was a little put off by the fact that the movie itself was apparently a big box office failure and that is a real shame.  I think that wasn't down to the quality of the movie itself, it was down to the competition at the time.  This movie was released round about the shame time as the Lord of the Rings and Harry Potter movies and against those unstoppable box office winners, it sadly didn't have a chance of competing.

That said, despite it coming at completely the wrong time release wise, I still find this adaptation utterly fascinating and I would even go so far as to say that it's not only the best adaptation of the popular tale but also my favourite by far.

One of the things that made it so interesting was the simple fact that while it is a family movie of sorts, it still deals with some pretty heavy duty themes.  The best part is obviously the relationship between Pan and Wendy but also the story behind Hook as well.  The writing really brings a feeling of the tragic to the characters.  Wendy has just met her 'first love', one that will envelope her so fully that she is willing to travel to a far off land to be with him.  But that's the problem isn't it?  She's fated to never really be with him because she knows she belongs in the real world.

That side of the story doesn't over shadow the tragic nature of the Hook character though, fair from it.  Hook is the man that can never be young.  He is the man that is doomed to be alone and unloved.  Isaacs performance is uttely beguiling as Hook and really rams that point of the character home but also does so with menace.  The fact that he can portray it in that way yet still make him a sympathetic character really goes to show just how good an actor Isaacs is.

Talking of Isaacs, the rest of the cast do a fantastic job of bringing the various characters to life with such a classic feel that you can't take your eyes from the screen as well as making the viewer feel involved with the story to such a degree that you find yourself emotionally invested in everything that is going on.

However the thing that struck me the most about the movie is how it looks.  The different scenes work so well together thanks to how they have cast and filmed them that it's almost as if you are seeing it come to life in front of your very eyes.  The difference in the scenes set in London and Neverland look so different that they shouldn't work together but they do so in such a beautiful way that your eyes are drawn to the myriad of details that the creators of the movie have managed to fit in.

All in  all, like I said earlier, this is honestly the best adaptation of the Peter Pan tale that I have ever watched and it was great to sit down to watch a movie with my son, who also loves pretty much any version of the story he can get his little hands on, and have us both enjoy it as much as one another.  Well worth picking up.  Definitely an under rated gem of a movie that deserves to be seen by a lot more people than it has been, especially for Isaacs performance alone.

Posted by Pat Scattergood at 05:27