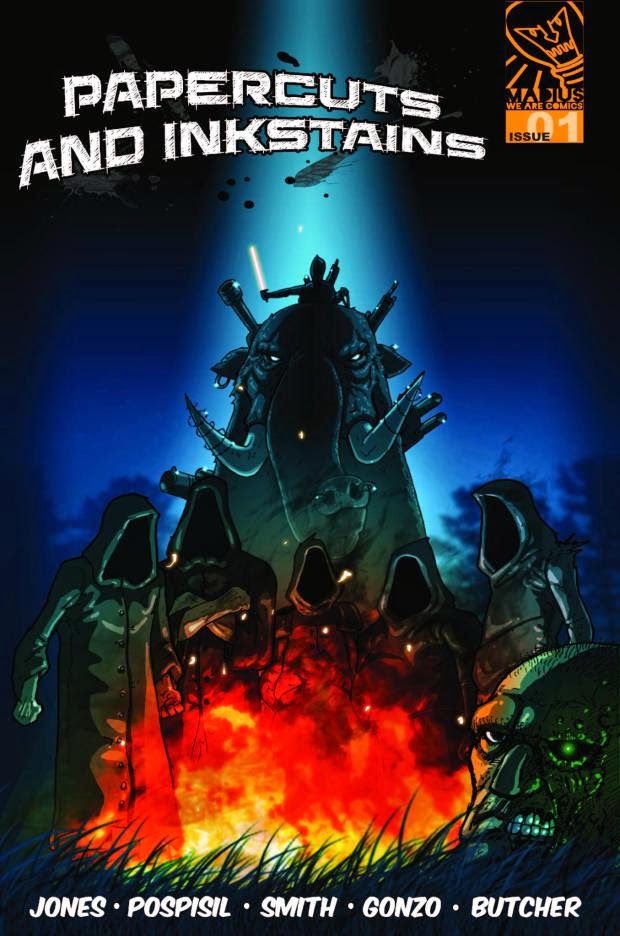 
Papercuts and Inkstains is everything that's weird and wonderful about the world of Madius Comics.

Featuring 3 stories from the mind of Robin Jones, with art by the talented likes of Kevin Pospisil, Mike Smith, Nick Gonzo and cover art by Dan Butcher, Papercuts and Inkstains will leave you scratching your head, laughing out loud and wondering whether it's clever or crazy...


Anthology titles can go one of two ways.  The stories can mesh together brilliantly well and end up as a great mix of stories or it can go the other way of being a jumbled up mess.  Looking at this title, I was wondering just where it would fall.

On paper, a title with stories that cross the boundaries of horror, science fiction and comedy shouldn't really work.  It should be a bit of a disjointed title yet it's not so let's go through the stories shall we?

The first issue of Papercuts and Inkstains starts with the story By 'Eck on Earth, a story that is both a mix of zombie comedy goodness and soap opera style 'acting'.  The humour comes across in the same vein as movies like Shaun of the Dead and Doghouse, which to this horror fan is a very good thing indeed.  The writing by Rob Jones for this one is absolutely spot on with the pacing and really had me in stitches.  The art for this one reminded me little bit of the Collateral series by Lee Taylor and Matt Nichols but with it's own spin on it.  In fact, the art gave it a real gritty feel to proceedings so props to Kevin Popisil for creating such a great way of linking up with the story by Jones.

The second story is Profits, a story drawn by Mike Smith.  This one is insanely funny.  A group of people meet up to summon a demon but spend their arguing about which shop the items for the ceremony came from and more.  This one is definitely a story that I could see someone like Nick Frost being involved in.  In much the same way, the pacing is definitely the strongest point of the story and that works really well with the stark art by Smith.  I loved that the backgrounds weren't perfect, the lighter parts really gave the panels some depth.  One of the things that impressed me the most was the simple fact that Smith was using the idea of the action breaking through the panels themselves and that worked superbly well.

Last but not least is the story No, drawn by Nick Gonzo.  This one is a bit of a hard one to describe without giving too much of the story away but basically it tells the story of an adjutant of a time war.  There are cyborg dinosaurs, robot creatures and more in this utterly bonkers tale.  The one thing that I didn't like about this one is that the art by Gonzo, while very well drawn, felt a little busy at times.  I would have done for a little less is more approach but that might just be a personal taste of mine really.  It felt like the story, that was a really interesting and quite cynical take on the idea, just needed a little bit more room to stretch out a little bit and really take flight.

All in all, if this is anything to go by then the new publisher by the name of Madius Comics are definitely a group to watch, especially with this brilliant rota of talent involved.