Guardians of the Galax Blu-Ray Review 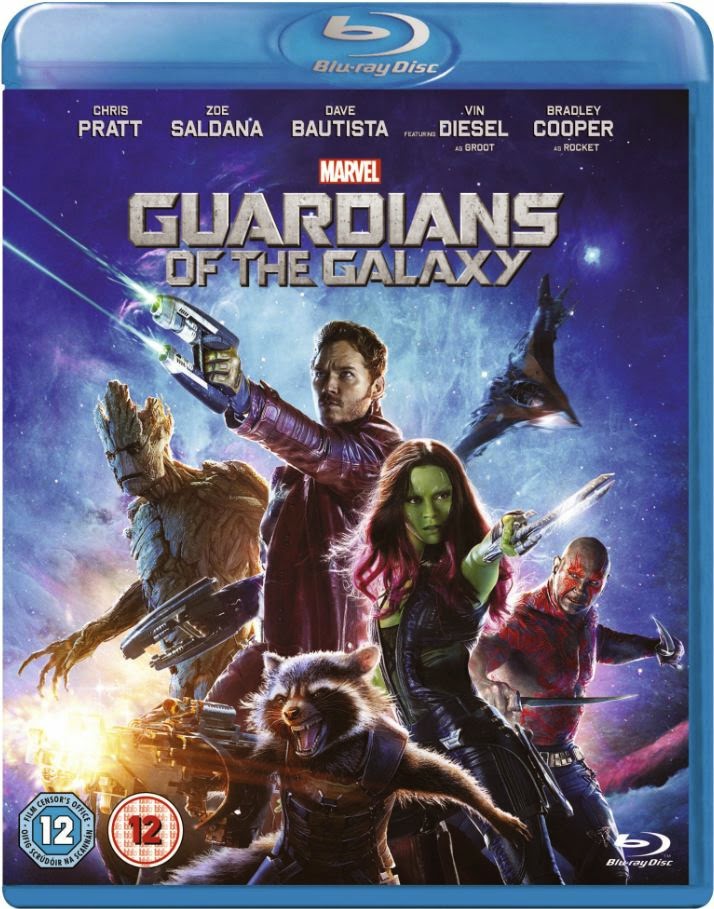 Based on the Comic Series By
Dan Abnett
Andy Lanning


From Marvel, the studio that brought you the global blockbuster franchises of Iron Man, Thor, Captain America and The Avengers, comes a new team the Guardians of the Galaxy.

An action packed, epic space adventure, Marvel's Guardians of the Galaxy expands the Marvel Cinematic Universe into the cosmos, where brash adventurer Peter Quill finds himself the object of an unrelenting bounty hunt after stealing a mysterious orb coveted by Ronan, a powerful villain with ambitions that threaten the entire universe.

But when Peter discovers the true power of the orb and the menace it poses to the cosmos, he must do his best to rally his ragtag rivals for a last, desperate stand with the galaxy's fate in the balance.


I'm going to be honest here.  I'm not the biggest fan in the world of the new Guardians of the Galaxy comics by Brian Michael Bendis so I wasn't really sure what to expect from the movie itself.  I'd read the early comics featuring the Guardians team when I was growing up but still wasn't all that familiar with them.

That said, I'm a big fan of James Gunn.  A man who has directed some of my favourite movies in the shape of Slither and Super, seemed like a bit of an 'out of left field' choice to take the reigns of a movie that Marvel hoped would create another franchise to add to their ever growing movie universe.  That said, with Gunn at the helm you knew you would at least be in for a fun, funny and exciting ride but would he create a movie that wouldn't look out of place in the Marvel world?

After finally settling down to watch it I have to admit one thing.  Guardians of the Galaxy is one of the movies that I have had the most fun watching in a very long time.

Gunn manages to combine both the exciting nature of the science fiction setting with some brilliant flashes of humour with such an accomplished hand that it felt like Gunn had been working in the Marvel movie world for his entire career.

The story itself of someone who isn't the stereotypical hero accidentally taking something that a major league villain wants isn't a new story at all.  In fact, it's been done a hell of a lot of times in the comic book world alone yet Gunn and Perlman give us a balls to the wall ride that kept me glued to the screen for the entire movie.

A lot of that is down to the writing but the cast do an absolutely fantastic job in bringing their characters to life.  One of the biggest surprises for me was Dave Bautista, known to wrestling fans as the WWE superstar Batista.  I thought his casting would be a bit too much of a gimmick for me as wrestlers don't really have that great of a track record in movies but his strong yet sometimes sympathetic portrayal of Drax was fantastic yet hilarious at the same time.

Chris Pratt as well definitely deserves a mention as Peter Quill / Star Lord.  He gives a bitter, sometimes cynical performance that is equal parts exciting and funny.  The fact that he apparently ad-libbed some of the funniest moments in the movie really made it clear that not only did he understand the character but also make it entirely his own.  There were moments where it looked like he had made the character a mix of Han Solo and Mal Reynolds yet managed to give him an unique voice that made him memorable.

The special features here are a good mix of funny and interesting, a bit like the movie itself really.  The commentary from Gunn makes it sound like making the movie was a complete and utter blast of a time and it was great to hear a commentary from someone that was so clearly passionate about the project.

All in all, this is an utterly fantastic superhero movie and a well worthy addition to the rather impressive list of Marvel movies.  I don't agree that it's the best of the Marvel movies but it does come extremely close.  I, for one, can't wait for the sequel to see more of these characters.  I would like to see a bit more of the characters pasts, seeing as this one focused on Quill the most, but if you want to be excited, made laugh and care about the characters then I urge you to grab this one as soon as you can.

Posted by Pat Scattergood at 03:35