Back to the Future Trilogy Blu-Ray Review 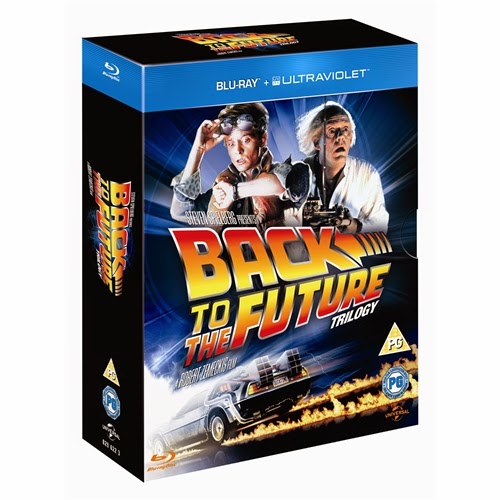 
Own all three action-packed Back To The Future films in this new collection, now including UltraViolet, so that you can revisit the action time and time again.

Back To The Future: The future for 17-year-old Marty McFly is not shaping up well. His family is dysfunctional, his schoolteacher, Mr Strickland, is out to get him, his music is just too loud and the rest of the world doesn't care. Only with his girlfriend, Jennifer Parker and local eccentric scientist, Dr Emmet Brown does he find the encouragement and excitement he needs. Never in time for his classes or his dinner, one day Marty wasn't in his time at all but having the time of his life. But what time is it? Marty got home early last night - 30 years early. One of the not-so-crazy scientist's experiment went slightly wrong and Marty was caught up in it to find himself at the wheel of a DeLorean car - converted into a time machine. It roars back to 1955 where he meets his parents when they were his age and sets out to make a man out of his dim-wit father.

Back To The Future 2: A scientist and his young friend discover, on their return trip from the future, that the present has been altered for the worse. Marty and Doc once again climb into the Delorean and travel back to the future in an attempt to put 1985 and their lives back to normal. The exhilarating visit by Marty and the Doc to the year 2015 seemingly resolves a few problems with the future McFly family. But when the two return home, they soon discover someone has tampered with time to produce a nightmarish Hill Valley, 1985. Their only hope is to once again get back to 1955 and save the future.

Back To The Future 3: At the end of the second sequel, the Delorean breaks down in a thunderstorm and the Doc is whisked away to a mystery destination. Marty is left trapped and looking for his friend. Doc Brown has in fact been sent even further to the past, into the age of the Wild West. Marty must travel to 1885 to rescue Doc from a premature end. Surviving an Indian attack and unfriendly townsfolk, Marty finds Doc Brown the blacksmith. But with the Doc under the spell of the charming Clara Clayton, it's lup to Marty to get them out of the wild west and back to the future. It's action, laughs and romance in this grand finale to the blockbuser time-travel series.

There is always one problem when you pick up a movie trilogy.  Nine times out of ten, the movies get worse as the series goes on.  It's extremely rare when that doesn't happen.  This is one of those times.
The Back to the Future trilogy is one of those extremely rare series of movies that doesn't suffer from the dreaded slump in quality as the series progresses.  Instead the three movies not only hold their own as separate movies but always as a series as well.
We all know the story of Marty McFly and Dr. Emmett Brown by now yet it is one of those stories that never seems to get old.  In fact, these movies have a kind of magic to them in that you notice something new each time you watch them and you will definitely watch them more than once.
The stories for the three movies are good for the entire trilogy but it's not the strong pacing and writing that makes these movies great, it is the performances by the cast.
In all honesty, this movie is definitely the Christopher Lloyd and Michael J. Fox show.  Their chemistry with each other keeps the movie chugging along brilliantly and you can't help but get behind their missions during the time traveling experiments that they embark upon.  Lloyd gives Brown both the eccentric side that we love about the loveably insane scientist but also makes him a quite sympathetic character in scenes as well.
The way the character of Marty progresses through the movie is very well done.  You could almost say that the character is growing up in front of your eyes and that gave the three movies a real sense of emotion and also excitement.
That said, the rest of the cast are extremely well chosen.  Crispin Glover is fantastic in his role as George McFly in the first movie and really makes the character his own.  It's a real shame that he was replaced in the two sequels but I suppose that's the risk you take in the movie world.  The addition of the criminally underated Mary Steenburgen for the third movie was a bold but successful movie as she more than holds up her own against the popular, returning characters.
One of the things that absolutely amazed me about this Blu-Ray set is just how clear the movies look.  If you look past the sometimes dated looking special effects, I mean the first movie was made thirty years ago, you would almost think that they had been made today.  The transfer really is that good.
However, one of the places that this set shines is the sheer treasure trove of special features that are here.  If you are a fan of the trilogy, the special effects here make you feel almost like a child on Christmas morning.  No stone is left uncovered and each and every aspect of the making of these classic movies is shown.  To a movie nerd like me, that was almost like heaven.
All in all, I honestly can recommend these movies enough.  Not only is the Back to the Future trilogy my favourite trilogy of all time, they are a series of movies that more than deserve their beloved reputation.  This set is most definitely an essential purchase for any movie fan.

Posted by Pat Scattergood at 09:35