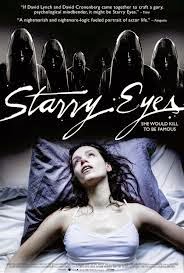 
Determined to make it as an actress in Hollywood, Sarah Walker spends her days working a dead-end job, enduring petty friendships and going on countless casting calls in hopes of catching her big break.

After a series of strange auditions, Sarah lands the leading role in a new film from a mysterious production company. But with this opportunity comes bizarre ramifications that will transform her both mentally and physically into something beautiful... and all together terrifying.

From the producer of Cheap Thrills and Jodorowsky’s Dune, Dennis Widmyer & Kevin Kolsch's STARRY EYES is an occult tale of ambition, possession, and the true cost of fame.


As a massive horror fan, the name of Maria Olsen is one that appears in many horror movies that I watch.  There's a reason why she is affectionately known as 'the hardest working woman in horror' and this is one of them.

When I watched this movie, I had very high hopes for it.  After seeing so many glowing reviews for Starry Eyes I must admit that I was very excited to see just what this movie would have in store for me as a horror fan and I wasn't disappointed.

One of the things that struck me the most was the simple fact that this movie works on a couple of different levels without feeling at all disjointed.  On one hand you can look at it as a deeply psychological look at the pressures of fame, of wanting to be in the public eye.  The way the main character descends in to madness and insanity is incredibly well done and well performed.  On the other hand, you can also look at it as a horror movie that is deeply influenced by Faust in that it explores just what a person would do to get everything that they want.

The reason that the movie works so well on both levels are the performances.  If Alex Essoe, who plays Sarah, isn't seen as a name to look out for after this star making turn then I have no idea what is wrong with the movie world.  Like I mentioned earlier, her performance and way of showing the characters descent is very well acted.  In fact, there were many moments where I just couldn't take my eyes off of her because she was completely stealing the scenes that she was involved in.

Don't get me wrong, the rest of the cast don't disappoint in the slightest.  They more than hold up their end of the deal with some really good performances ranging from subtle to almost purely evil at times.  The sheer variety of acting styles in the cast working superbly well so bravo to the casting team involved.  I especially liked the touch of class that Olsen gives the movie as the casting director.  She almost felt like the centre of the movie for all that happened to stretch out from.

I would be remiss if I didn't mention the gore and the horrific elements here for the pure horror fans.  The practical approach to the effects that the team took really do make the gore filled moments a lot more effective than if they had gone the CGI route and really make the scenes crawl under your skin and stay there long after the movie has ended.

All in all, this is an absolutely brilliant horror movie that doesn't treat it's viewers as stupid.  They take an intelligent approach to the story and that really raises it's quality much higher than a lot of other indie horrors that I have seen.  I would even go so far as to say that this is one of the best that I have seen for a very long time.

Starry Eyes is available to buy from 16th March!

Posted by Pat Scattergood at 23:29