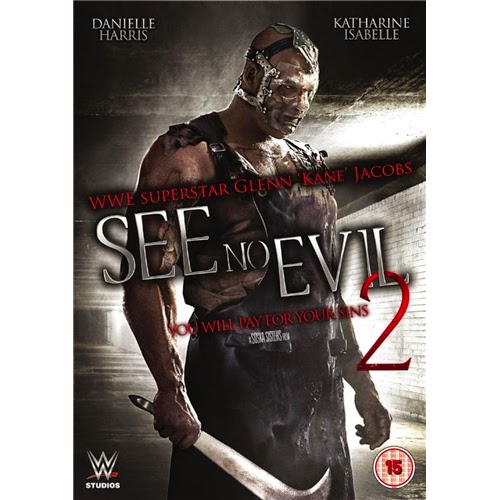 
Jacob Goodnight (WWE star Glenn 'Kane' Jacobs) returns to bring his own unique brand of judgment and punishment to a group of unwitting victims. City Morgue technician, Amy is getting ready to go out for an evening of birthday partying with her friends when the one-eyed corpse of psychotic killer Jacob Goodnight (Jacobs) is brought in.

With the birthday plans ruined, Amy's friends decide to surprise her by bringing the party to the morgue. However, the surprise is on them when the corpse unexpectedly rises from the cold sub-basement slab. Their wild party quickly turns into a terrifying slayfest as the sadistic mass-murderer resumes his savage rampage.


The first See No Evil movie starring the WWE's Glenn Jacobs, better known to wrestling fans as Kane, was a well paced and enjoyable slasher movie with some fantastic nods to the classic 70's and 80's movies that made the genre so fun for horror movie fans.

Well, six years later we have a sequel, directed by the Soska sisters, where Jacob Goodnight returns to slay yet more victims.

After seeing their work directing American Mary, I was quite surprised yet pleased that WWE Studio's had chosen them to herald their own cult classic slasher characters return to the genre.  With them at the helm I was expecting a bold and fresh take on the genre but is that what we got?

Well yes and no.  One of the main problems for me was quite simply the pacing.  There were a few moments here and there where the movie really seemed to drag.  It almost felt like a 60 minute television episode stretched out to the 90 minute or so run time.

For the most part, the characters were merely cannon fodder.  That's expected for these sorts of horror movies but there were two that really stood out for me and really made me enjoy the movie.  You have the horror scream queen in the shape of Danielle Harris.  Harris really brings Amy to life and makes you care about whether or not she will survive the night.

Another stand out for me is Katharine Isabelle, reuniting with the Soska sisters after working with them on American Mary, as an incredibly unhinged Tamara.  Some of her scenes were really over the top and others came across as bonkers yet she really made them some of the most memorable of the movie itself.

With a lot of modern horror movies feeling like there is the need to flesh out the back stories for the killers, See No Evil 2 does the same.  For me, that took away from the character, played with menace by Glenn Jacobs, because the first movie gave us just enough information to make us believe how and why he is murderous.  Here they add to it but it felt like over kill and took away some of the mystery of the character.

All in all, this is a sequel worth watching.  For me, it wasn't as good as the original yet it was a welcome return for the character of Jacob Goodnight.  The direction by the Soska's gave the movie a dark and grimy feel, which when you couple that with the performances by Harris and Isabelle make this one of the better WWE Studio's offerings.

Posted by Pat Scattergood at 12:22