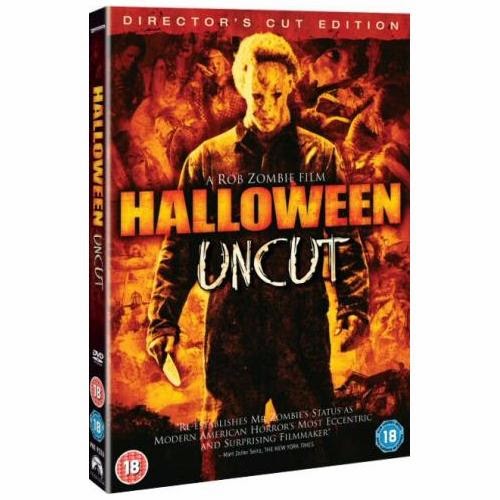 Based on the 1978 Screenplay By
John Carpenter
Debra Hill

Inspired by Carpenter's 1978 original, Rob Zombie's Halloween focuses on the early years of the young Michael Myers. After going on a murdering rampage in his home-town Michael is sentenced to 17 years of incarceration at the Smith's Grove Sanitarium maximum-security mental facility where he is treated by noted child behaviorist Dr. Samuel Loomis - the only person who can truly understand Michael's evil nature.

Now, 17 years later, Michael escapes from the mental facility on Halloween and begins a murderous trek back to Haddonfield to continue his killing streak and seek resolution to events from his past.

In Haddonfield, Michael begins stalking a high school girl, Laurie Strode, and her friends, Annie and Lynda. When Dr. Loomis, now a successful author for his book on Michael, hears of his escape, he enlists the help of Haddonfield's Sheriff Brackett to find and put an end to Michael's reign of terror.


After watching movies like House of 1000 Corpses and The Devil's Rejects, I became very interested in finally checking out the Rob Zombie version of Halloween.  Based on the seminal screenplay of the classic 1978 movie by John Carpenter, the movie had a very high standard to live up but I was hoping that Rob Zombie would put his own stamp on it.

The thing that struck me the most about this movie is that it didn't really seem all that much like a Halloween movie to me.  If anything, it just felt like a normal, bog standard serial killer movie and not a new version of a Michael Myers blood bath.

As a fan of the original movies myself, the thing that I always liked about the original movie was the simple fact that Myers was a simple, unstoppable monster that had an air of mystery as well as dread that surrounded him wherever he went.  Here Zombie makes quite a big mistake in my eyes.  He tried to make Myers more human and even more sympathetic but to me, it didn't work.  If anything, it changed the entire character and not for the better.

Don't get me wrong, it's not a terrible movie by any stretch of the imagination.  In fact, if it was just a serial killer movie then it might have just worked better without the Carpenter link.  The writing just seemed to miss the point of the original movies and with that, Zombie created a movie that felt a little disjointed at  times.  He spends nearly 40 minutes at the beginning giving the once unstoppable maniac a back story but then when the murders do start, they almost do a 360 on it and have him just cut and slice through the victims.

That said, Mane gives a great performance as Myers and really puts off an air of menace throughout the movie.  The fact that he could portray a lot with just a nod of his head and more really made the movie a lot better.  The rest of the cast do a good job with their characters as well.  There is definitely a drinking game here where you could take a swig whenever you see a horror movie icon because this movie is jam packed with them.  Plus it's always great to see the criminally under rated Danielle Harris in a horror movie.

All in all, I have to admit that while the movie isn't a complete bust, it was a bit of a disappointment considering the cast and talent involved.  With Zombie at the helm, I was expecting something that would really get under my skin and stay with me long after the credits had rolled.  What we ended up with was a movie that was largely forgettable and that's a real shame.