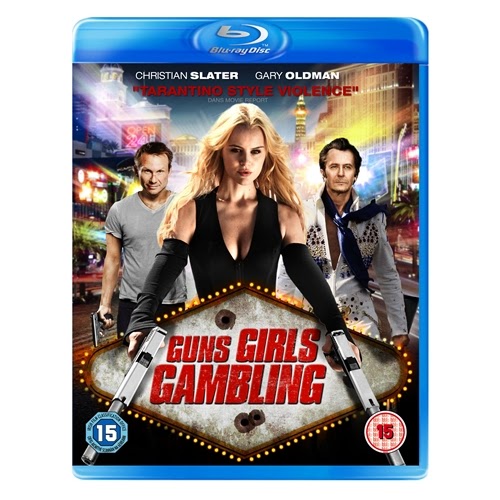 Written and Directed By
Michael Winnick


When wrongly accused of stealing a priceless artifact during a poker game, corrupts cops, assassins and a drop dead beautiful blonde set out on a mission to hunt John Smith down with the aim of getting their hands on the million-dollar reward for its safe return.


With a name like Guns, Girls and Gambling then you know what you are going to get, especially with Christian Slater in one of the leading roles.

While it is true that Slater's star has faded since his hey day, he has managed to crank out a lot of movies.  Some have been really good and others, well others have not been quite so kind to his career.

I picked this one up on a whim after seeing that not only Slater was involved but also the brilliant Gary Oldman.  Quite how they managed to rope him in to this movie is beyond me but after watching it, I have to admit that I was quite surprised at just how much I enjoyed this one.

Is it a perfect movie?  Far from it.  However, it is a fast paced action comedy that while not original in the slightest, it is a fun movie.  There are some absolutely brilliant cameo appearances, the humour is delightfully un-pc and the set pieces, along with the self aware dialogue, reminds me a little bit of Quentin Tarantino movies.  Granted with a lower budget but the influences are definitely there.

Cast wise, there aren't any surprises performance wise but they all seem to be having a lot of fun in the movie as well as not taking themselves seriously at all.  I've always been a bit of a sucker for a movie in that vein and this one has that in buckets.

Out of all the cast, I was most impressed with Slater himself.  A few of his more recent movies have had performances that felt phoned in but here, he really seems to be enjoying playing the part of John Smith, a hapless loser that always seems to be stuck in the middle of all sorts of mayhem.

The direction by Michael Winnick does really show some promise and with a slightly bigger budget I could easily see him making a really good balls to the wall movie.  However, the writing does let down the movie a little because it does start to flag in some places, almost as if the dialogue was just stuck in there to pad out the run  time a little.

All in all, this is a fun little movie.  It's not going to be one that you watch over and over but it's well worth a rental at least.  Just don't be prepared to take it at all seriously.  Then again, would you really take a movie called Guns, Girls and Gambling seriously?