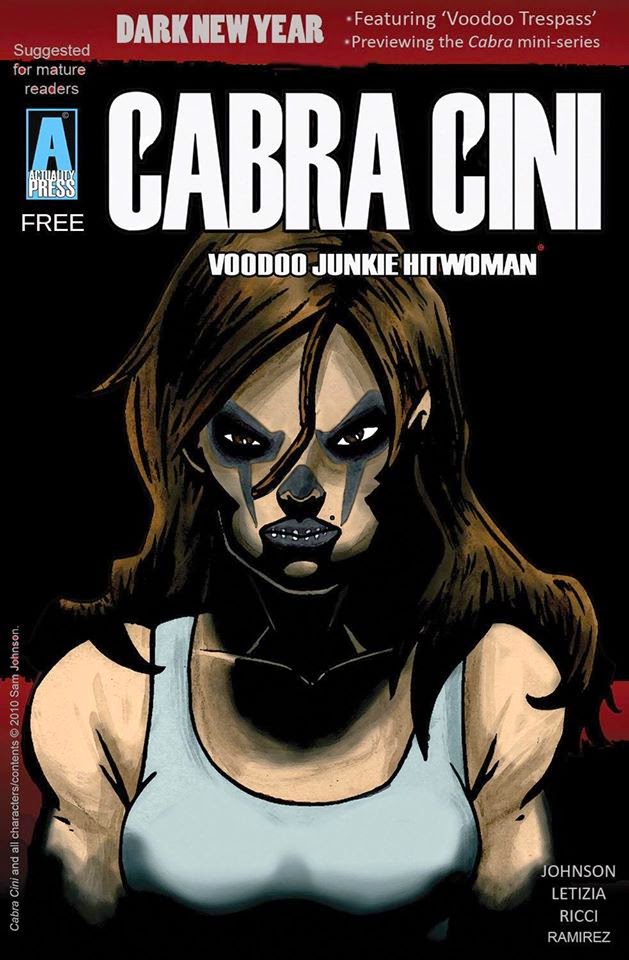 
No longer willing to let her boyfriend/pimp treat her like dirt, Cabra Cini got lethal payback with the help of voodoo magik - and liked it. Voodoo became her new addiction and Cabra has cleaned up her act and forged a deadly new vocation…

'Voodoo Trespass', Cabra's debut story, throws us headlong into her twisted world, when she is hired by bereaved parents to take out the teenage boy who killed their daughter, ‘playing vampire’. Cabra utilizes her magik to access a dimension known as ‘The Infinity’ – Limbo’s ‘crazy cousin, locked away in the attic’ – which, for those who trespass upon it, can serve as a dimensional gateway between where they are and wherever they want to go. Though with what The Rook, the ruler of The Infinity, throws at its abusers, the journey can come at a monstrously high cost...

Beyond the horrors of The Infinity, we meet some of the characters who will also feature in Cabra's forthcoming mini-series, including her friend-with-benefits Geoff; her pet werewolf El Hombre Lobo; and insane Neo-Nazi White Out and his lobotomized butler Chives...


Sam Johnson, co-creator of The Almighties, returns with Cabra Cini: Voodoo Junkie Hitwoman - Dark New Year, a dark tale set forward as a taster of the four part mini-series that will soon be released by Actuality Press.

Completely different from the action comedy of his The Almighties title, Cabra Cini is a dark look in to the world of the title character and couldn't be more different.

With a great opening that gives us, the readers, just enough to hook us in but leaves us wanting more.  Being familiar with Johnson's work, Cabra Cini really shows just how versatile he is.  The story here is well paced, well written and really shows a lot of promise for the forthcoming mini-series.

We're shown Cabra herself, a couple of the characters that will no doubt play a big role in the title as well as seeing some great background work for the character.  Johnson manages to pack a lot in to the short page count without it feeling rushed or cluttered.  You are pretty much dropped straight in to the world but not once does it feel confusing.  Instead there's a great feeling of dread that runs through the story and I loved the idea of traveling between the worlds but there being a consequence if you do.

As well as the debut story for the character, which has some great art by Bruno Letizia that really brings the action to life, we're also treated to some promo art from the mini series as well from Rodrigo Diaz Ricci.  If the combination of the two are anything to go by then the series is going to be one that will be well worth picking up.

All in all, despite it's short page count, Johnson and his team really have made a title that feels unique and exciting yet manages to keep Johnson's unique writing style.  I, for one, can't wait to see the mini series and this is definitely a fantastic jumping on point.