The Boy in the Dress Review 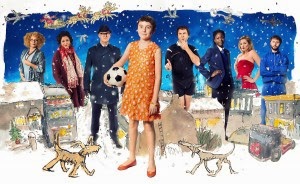 Based On
'The Boy in the Dress' by David Walliams


Dennis is an ordinary boy but he feels different. He creates a whole new persona and puts it to the ultimate test - can a boy wear a dress?

A lot of the time, television channels go the safe route with their Christmas period programming.  They either show reruns or family viewing fare that is so syrupy sweet that it can sometimes be hard work to get through it.

The Boy in the Dress is very different.

The thing that I liked the most about this adaptation of David Walliams' debut novel is that not only is it a very funny story but it's also a very heart warming one without feeling the need to over simplify things for the viewers.

The message that runs through the movie that everybody is human no matter what is a good one.  While that may not seem like the most original story in the world, the execution of the story is so well thought out and paced that it's absolutely gripping.

A lot of that is down to the superb cast.  You have some great cameo appearances from people such as the football player Gary Lineker, Kate Moss and even David Walliams himself as a hilariously camp football referee.  You also have Jennifer Saunders as the French teacher as well but with such big names as these, you were always going to need a great actor to play the title role.  Here that role is filled with style by the young Billy Kennedy.  Not only does he play the part with such an air of sympathy but he also does it with a knowing wink and acts as if the things that are happening are completely normal.  I loved that they went that route with it instead of making it a big deal because if they had have gone the opposite way, I don't think the adaptation would have worked as well.

There were some parts that didn't gel as much as I would have hoped but that was mainly down to the time restraints of the television movie being an hour long.  I would have liked to have seen a little bit more of how Dennis dealt with his mother leaving or maybe even  a little more of the father himself but that's a minor complaint with how entertaining and heart warming the story was.

All in all, if you get a chance to catch this one then I really urge that you do.  The story is sweet without being over the top and there are some absolutely brilliant hilarious moments as well.  I honestly think that this will definitely be a breakout role for the young Billy Kennedy.