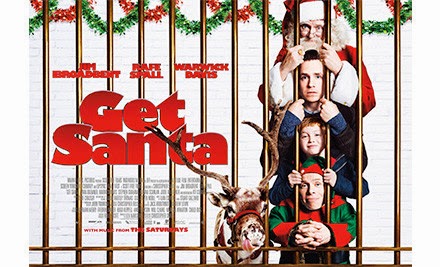 Written and Directed By
Christopher Smith


It's days before Christmas and reindeer are found running loose through the streets of London. Meanwhile an astonished 9 year-old Tom discovers Santa in the garden shed.

He has crash landed while test driving his new sleigh and enlists Tom and his father Steve to help him get back to Lapland. But what happens when Santa is arrested and thrown into prison? Will Steve and Tom be able to break him out in time for Christmas?


When I read that Jim Broadbent was going to be Santa in a movie again, after voicing the role in Arthur Christmas, I was really excited.

That said, the idea of a father and son trying to save Christmas isn't a very new one at all.  In fact, there were quite a few movies recently with similar story lines but when my little lad saw the trailer and was excited enough to ask to go then I figured I'd give it a go.

The movie itself didn't exactly set my world on fire so to speak.  The pacing was well thought out, the performances heart felt but for some reason, the movie itself just didn't gel as much as I was hoping it would.

Story wise, it wasn't the most original Christmas movie I've ever seen but the thing that made it worth watching were the performances from Jim Broadbent as Santa and Rafe Spall as Steve.  The way Spall played the father as one full of regret and just wanting to make up the time he has lost with his son was very well acted and really gave the movie an emotional and heart warming feel.  There were quite a few scenes where the interplay between Spall and his son, played by Kit Connor, feel completely realistic and I couldn't take my eyes from the screen.

Jim Broadbent plays Santa with an almost forgetful yet kind slant.  The playful nature of the performance really brings a lot of fun and laughs but there is a beautiful scene set in the prison where Santa tells some of the inmates what they wanted for Christmas when they were younger.  I know that sounds like a bog standard scene but it really sets the kind tone that runs through the movie.

The younger children will love the scenes where the reindeer are involved.  There are a lot of fart jokes pretty much any time they are on screen but for me, the jokes there felt like they were just being repeated for the sake of filling some time.

My only other minor complaint is the fight scene in the prison.  It seemed out of place with the rest of the movie.  Plus, for a movie like this, it felt a little bit too over the top.

All in all, the movie itself was a good slice of Christmas entertainment with a couple of minor flaws but for the most part, it was a fun ride with a nice, heartfelt tone thanks to the performances from Spall and Broadbent.