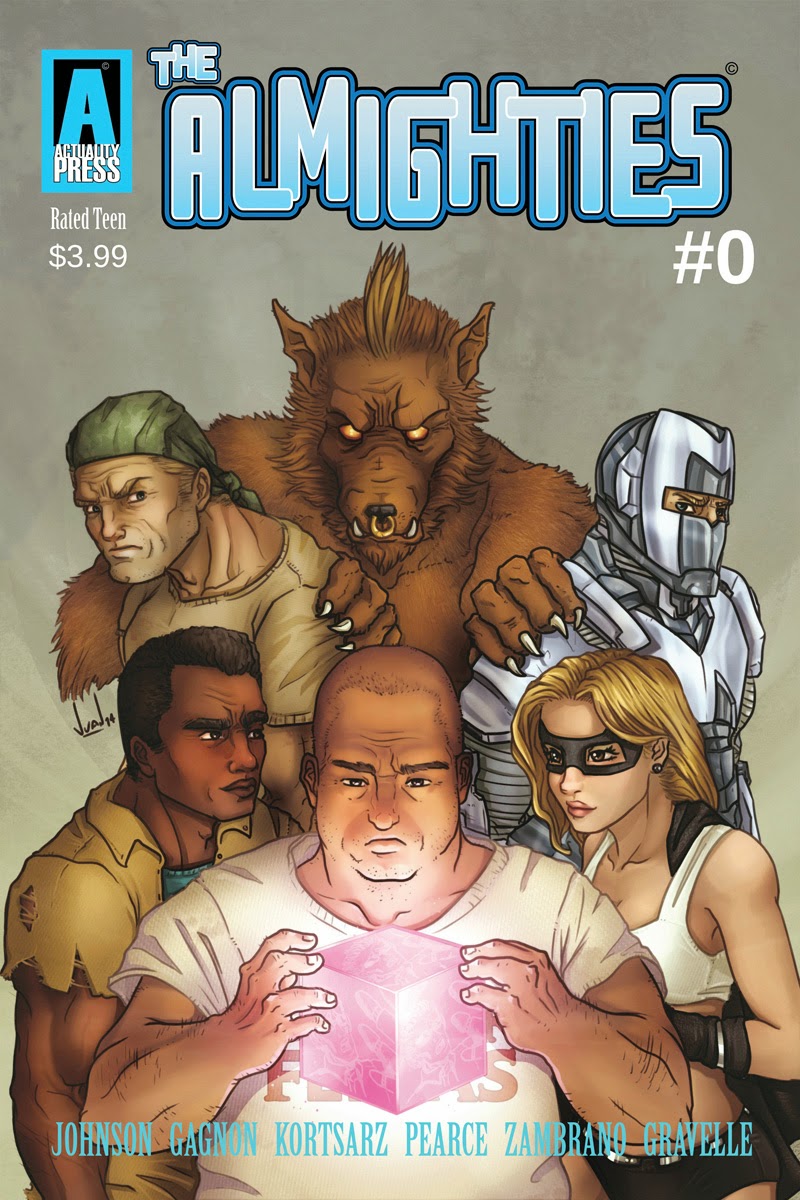 
Joe Cyborg, a disembodied head attached to a robot body - who holds an undisclosed position at The White House, is looking to amass an off-the-books team of super-heroes - and former team-mates, The Almighties, have caught his eye...

Joe is not without his reservations over the motley crew; but if anyone should need replacing, he already has a new member in mind - in the form of (the Deadpool-parodying) Wayne Winston, who lives in a whale skeleton, in the mysterious underground lair known as Subterranea, with his step-parents Nigel and Rodent.

“This might be a good time for Wayne to be offered such an opportunity,” says Sam Johnson, The Almighties' co-creator/writer. “The bizarre habitat he and his family call home was chosen for a reason – its serene environment keeps Wayne's more...'troubling'...character traits in check... But, at the behest of would-be world-conqueror Muhky – who wants to utilize Subterranea for his own ends - a demon imp is on his way to serve Wayne and co. a very brutal eviction.”

However, whether Wayne will get his lifeline rests in the hands of Stefanos. “Stef is a guy who acts as a part-time presidential aide, when he's not needed at his takeout, Doner Fella's,” Johnson continues; “So with his connection to the team and his (inexplicably) trusted position at The White House, who better for Joe Cyborg to have review The Almighties' potential line-up?”

Stefanos is a man in great demand, though - and his skills are sought after in The Almighties #0 not just by Joe, but by President Obama himself – when Stef is called upon to go back in time and save Obama's top Man in Black – Agent Coleslaw – after Coleslaw gets his face blasted off in battle.

Written by Sam Johnson (Geek-Girl, Cabra Cini: Voodoo Junkie Hitwoman) & Mike Gagnon (Classic Illustrated, Monkeys & Midgets), illustrated by Eleonora Kortsarz, Graham Pearce, Pablo Zambrano & Ron Gravelle, published by Actuality Press and rated 'Teen,' The Almighties #0 is released on November 5th - along with a chance for newcomers to catch up on the team's debut adventure, when The Almighties #1 gets a new Limited Variant Edition – both available at www.actualitypress.com


Anyone that has visited this site will know that I love my parody comics and superhero stories that have a sense of humor running through them and when you pick up the comics by Sam Johnson then you know that is exactly what you are going to get.

After reading issue one of The Almighties, I was solidly in the camp of wanting to see more of the rag tag band of superheroes and that is what we have right here.

With issue 0, the team of Johnson and Gagnon have crafted a brilliant jump on point for the newcomers to the team.  We're introduced to the team members as well as the Deadpool parodying Wayne Winston.  The humour comes thick and fast in this one with the characters introduced in shorter stories but then we get to see, who I would definitely class as the cult character of the group, Stefanos travel back in time on a mission directly from the President himself.

The one thing I was worried about with this style of story telling is that with so many artists and colourists involved, would it appear disjointed?

Simply put, no.  The vastly different styles all seem to mesh very well and that's most evident in the story The Gimp With a Gob, the Deadpool parody story.  I have to admit that a couple of stories had art styles that I wasn't expecting them to have but it worked really well.  The whole team have given the issue so many nods to the different eras of superhero comics that you really can say that art wise, there really is something for everyone.

Storywise, the best of the lot is by far Gimp With a Gob, which you would think would fall flat.  A parody of a character that is himself a parody yet it works and works very well.  There were so many moments that had me laughing that I just couldn't wait to see what Winston was going to do next.  I also loved the funny twist at the end of the issue too.

If you want something funny that you can pick up and enjoy then this is definitely one that is well worth grabbing.  Johnson and Gagnon really work well as a team, especially alongside the artists here, and I personally can't wait to see more of the team at work.