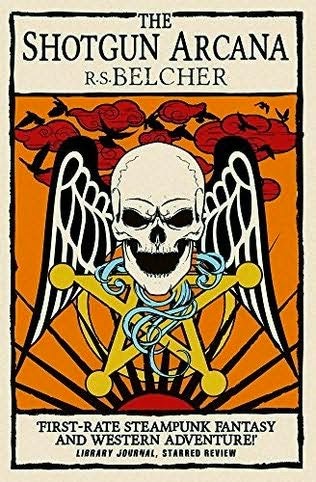 
1870. A haven for the blessed and the damned, including a fallen angel, a mad scientist, a pirate queen, and a deputy who is kin to coyotes, Golgotha has come through many nightmarish trials, but now an army of thirty-two outlaws, lunatics, serial killers, and cannibals are converging on the town, drawn by a grisly relic that dates back to the Donner Party…and the dawn of humanity.

Sheriff Jon Highfather and his deputies already have their hands full dealing with train robbers, a mysterious series of brutal murders, and the usual outbreaks of weirdness. But with thirty-two of the most vicious killers on Earth riding into Golgotha in just a few day’s time, the town and its people will be tested as never before—and some of them will never be the same.


With such an impressive debut book like The Six Tarot, I was a little worried that Belcher may become seen as a one trick pony so to speak so when this book came through my letterbox courtesy of those lovely folks at Titan Books, I ended up wondering just where the author would be able to take the characters.

Well, after reading this one there is one thing that is certain.  Belcher is most definitely not a one trick pony.

The best way to describe The Shotgun Arcana is that it's the sort of book that would come from a bit of a thryst between Buffy the Vampire Slayer and Deadwood behind the bar of a run down old saloon.

Equal parts horrifying, adventurous and exciting, this second novel in the Six Gun Tarot series is definitely one that not only continues the series with style but also expands on it in such a way that you can't take your eyes off of the page.  Belcher's near lyrical style just flows off the page with sometimes subtle and sometimes fast pacing but never fails to hook you in.  You really feel like you are involved in the story and that the action is unfolding in front of you.

The characters themselves are well rounded, although there were a couple that I wanted to know a bit more about, but the thing that impressed me the most is that you just didn't know who was safe and who was doomed.  There were so many scenes where I really didn't know if the characters I was rooting for would even get to the end of the page let alone the end of the novel itself.

I think that the biggest strength of this novel is the way that Belcher manages to mix the fantastical, religious, horrifying and action packed moments without the novel becoming too messy or disjointed.  If the rest of the series is going to be half as good as the first two novels then this is going to be a series that will be well worth keeping an eye on and adding to your book shelf.