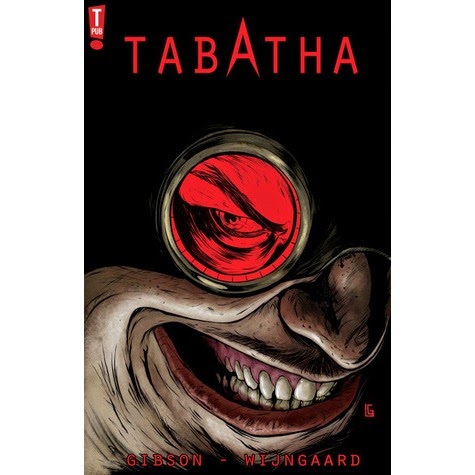 
Luke works as a mailman in Los Angeles and moonlights as a thief - the empty houses on his postal route are rich, easy pickings for him and his friends.

Everything goes to plan until one house turns out to be not quite so empty.  The situation escalates rapidly and the happy go lucky thieves are left battling for their lives.

And all because of Tabatha.


As visitors to this site know, I am a big fan of my horror.  Doesn't matter if it's movies, comic books, novels, I love to get my hands on new horror.

After visiting the Nottingham Comic Convention recently, I picked up the much lauded Tabatha graphic novel written by Neil Gibson and published by T Pub but was there anyway that it could possibly live up to the hype surrounding it?

The answer is a resounding yes.

The story itself reads a little bit like one of those 80's horror comedies that would combine blood, pop culture references and twists to great effect.  Tabatha manages to do that all while retaining its own rather unique voice.

With a story such as this involving a serial killer trying to bring a sex doll to life, you know not to take it all too seriously but with some titles, that sort of style can tend to go over the top but here, Gibson manages to juggle the dark humor with the violence but also it was great to try to catch all the pop culture references that they managed to cram in.

One of the main strengths of the collection was the pacing.  You can feel the sense of dread building throughout the different parts of the story.  When it all comes to a head, the pacing ramps up and you can't take your eyes away from the action.

All for that would be for nothing if the art wasn't up to the level of the story itself but with someone as talented as Caspar Wijngaard, you just know that you are in for a treat.  The colorful art here really jumps to life when the 'stuff' really hits the fan near the end of the graphic novel.  With such an eye for detail, the story truly comes to life in Wijngaard's hands.

Tabatha is one of those rare collections that actually not only lives up to the expectations that the hype placed around it but surpasses them, especially with the twist at the end that left me with a knowing smile.  If you like your horror with a dark comedic side but packed with twists, turns and pop culture references then this is definitely a title that you will want to pick up.