Doctor Who: New Adventures with the Twelfth Doctor Issue 1 Review 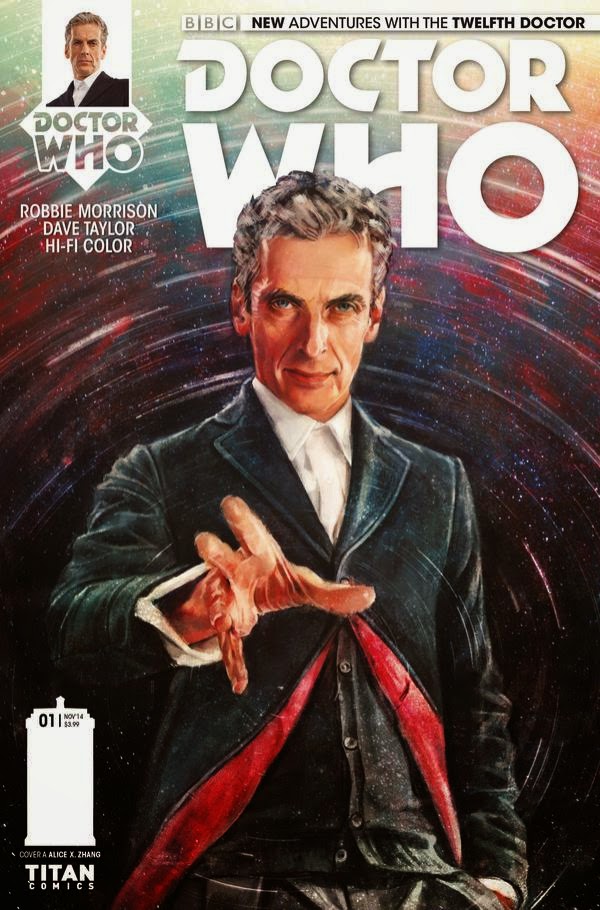 
After a thousand years of war on the planet Trenzalore, the Doctor regenerated into a brand-new incarnation!

Clare struggled at first to reconcile the Doctor's new face with that of her closest friend, but the pair are now back in the saddle of cosmic adventure, even if this new Doctor is brusquer and more unpredictable - the kind of Doctor who wishes people would just get out of his way and let him get on with the business of saving them!


After the good first issues of the new series of comic books featuring the Tenth and Eleventh versions of the Doctor, it was pretty inevitable that Titan Comics were going to bring the twelfth and newest Doctor to their pages.

With the television show dividing the fans with Peter Capaldi's portrayal, I was wondering where they would be taking his comic book adventures.  I, for one, have been really liking the fact that Capaldi and the stories in the show have been giving little nods towards his past versions and wasn't really all that sure that they would be able to translate that on to the page itself.

After reading this first issue I have to admit that they have done a superb job of giving the character both the energy and personality that Capaldi has worked so hard to infuse the character with.

The thing that struck me the most about the first issue, and also with this being the first story arc for the Doctor in this series, is just how spot on they have gotten the characters of Clara and The Doctor.  You can read their dialogue in their voices with it even missing a beat, especially with the dialogue given to the Doctor.  I would even go so far as to say that they have gotten the character so spot on that this story wouldn't feel at all out of place on the show itself and feels like it really was written by someone who is not only a fan but respects the characters too.

Another thing that I really liked was the fast pacing of the story as well as the twist at the end with the emergence of something from the Doctor's past.  I won't go too much in to details here but if you are a long term fan of the show then it will definitely interest you.  That said, if you are a newer fan to the show then you will still enjoy this fast story.  You're given just enough time to orientate yourself in to the story and then you're off on the adventure.  You are then lead to see someone that you think is going to be the villain of the story because he's quickly thrust aside for the real 'big bad' that is behind it all.  I loved that twist, maybe more so due to the fact that the original person that you are lead to believe is the cause of the all the trouble just felt a little forced and bland so it was a good way of throwing a red herring to the readers.

Art wise, I would definitely say that this is by far the best of the three series of the Doctor put out by Titan Comics.  Hi-Fi and Dave Taylor do an absolutely gorgeous job of making the characters and the story come to life.  They've really captured the facial expressions of Capaldi and Coleman as their respective characters brilliantly well to such a degree that it almost felt like an animated adventure for the pair.  However, the best parts of the comic were by far, the ending couple of pages that had a real feeling of claustrophobia and dread.

All in all, this one is definitely one for the fans to pick up because it really does feel like a story that would slot right in to the series without being at all out of place.  The characters are spot on, the writing is fast paced and will not only hook in the new fans but will also please the long term fans with the amount of injokes and nods to the history of the character.  There's even a gag about hiding behind the sofa if you get scared!

Definitely my favorite of the three Doctor Who series' put out by Titan Comics.