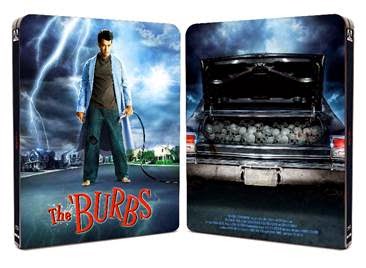 
The films of director Joe Dante have taken us to some strange places – a mysterious Chinatown antique store in Gremlins; a secluded resort  populated by werewolves in The Howling; even deep inside the human body in Innerspace. But now he takes us to the strangest place of all – suburbia!

Family man Ray Peterson (Tom Hanks) is looking forward to a week of putting his feet up at home in the quiet, leafy cul-de-sac of Mayfield Place. But his plans are scuppered by the arrival of new next-door neighbours, The Klopeks, whose behaviour and habits are more than just a little kooky. But things go from kooky to downright sinister when local old boy Walter disappears, leading Ray and his buddies to suspect their new neighbours of killing and eating him! Sure, the Klopeks are a strange bunch what with their digging up the backyard in the middle of the night – but they’re not devil-worshipping cannibal killers… are they?

If you’re looking for a knowing slice of tongue-in-cheek terror then look no further than The ‘Burbs. A standout horror comedy from a director who has given us more than his fair share of fun frighteners, The ‘Burbs assembles a superb cast including Tom Hanks, Bruce Dern, Carrie Fisher and Corey Feldman in a tall tale of small-town terror. You’ll never look at those eccentric neighbours in the same way again! The super-deluxe package, which is available both as a standard Blu-ray and as a limited edition Blu-ray SteelBook, is full of special features and bonus material. 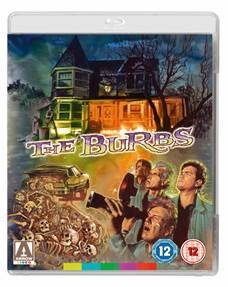 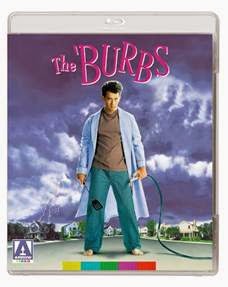 
It's quite hard to believe that this year marks the 25th anniversary of the release of The 'Burbs, one of the best movies not only made in the 80's but also one of Tom Hanks' best.

The 'Burbs is not only one of Joe Dante's best movies but one of his most unique.  He manages to mix a varied combination of genres and come out with a fully fleshed out, very darkly funny and interesting movie at the end of it.  Dante mixes moments of dark comedy, horror and even a feel of a good old fashioned thriller in the vein of a darker Hitchcock without it feeling at all disjointed.

A lot of the thanks of that is down to the varied and well assembled cast.  Tom Hanks always seemed to go a little over the top in some of his 80's movies but here he manages to switch between the silly Hanks that we know and love and the serious one too.  The way he seems to swop between the two throughout the movie depending on the scenes is one of the things that has made this my favorite Hanks movie.

That's not to say that the rest of the cast isn't up to that standard because they are.  You have Carrie Fisher, Bruce Dern, even Corey Fieldman and so much more that they all seem to own their various parts of the movie.  I absolutely loved Dern's performance the most out of the rest of the cast thanks to his wild eyed craziness, especially in the scenes where he really seemed to be egging on Hanks' characters descent in to madness.

Like I said earlier, the various releases of this movie have always short changed the fans in terms of special features but that stops here.  Arrow Films have really found some utterly brilliant bits and pieces for the fans to really sink their teeth in to.  My favorite of these being the addition of Dante's work print and the booklet that you can get with the movie itself.  So chock full with unseen moments and tons of information that it really will thrill fans of the movie.

All in all, Arrow Films just keep getting better and better with their releases, especially with their classic and cult movies.  This is definitely one of their best and it's about time that such a unique and great movie such as this one got the release that it finally deserved.

The 'Burbs is available on Blu-ray from September 15th

Posted by Pat Scattergood at 01:29