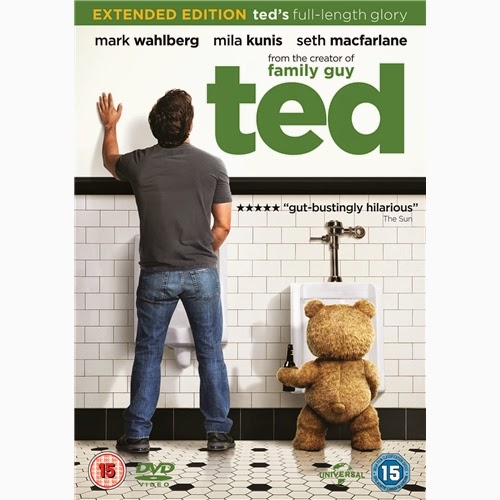 
Family Guy creator Seth MacFarlane brings his boundary-pushing brand of humor to the big screen for the first time as writer, director and voice star of Ted. In the live action/CG-animated comedy, he tells the story of John Bennett (Mark Wahlberg), a grown man who must deal with the cherished teddy bear who came to life as the result of a childhood wish... and has refused to leave his side ever since.


As a fan of Family Guy I have to admit that the recent seasons have been a little bit hit and miss so when they announced that MacFarlane would be making a movie I was a little hesitant to watch it.

After finally getting around to popping it in to the DVD player I must admit that I enjoyed it a lot more than I thought I actually would.

With a cast like the one assembled here, I was expecting a little bit more in the way of memorable characters but that said, the ones that are given the spotlight, even fleetingly, are good with the lines that they are given.

For me however, the highlight is definitely the character of Donny played with camp menace by Giovanni Ribisi.  I loved how much of a creepy vibe he gave the character and for me, he gave me quite a few of the laughs with some of his antics, especially his dancing to the Tiffany song I Think We're Alone Now.

Another thing that I liked was that while the character of Ted himself sounded near identical to the Peter Griffin character from Family Guy, they actually picked up on that and made a joke out of it.  One of the biggest and best scenes for me was the cameo from Flash Gordon himself, Sam J. Jones.  His cameo really has to be seen to be believed and is definitely a great reason to pick up the movie.

However, I couldn't really get behind either of the main characters.  John Bennett, played by Mark Wahlberg, just came across as annoying more than sympathetic and yet didn't change in the slightest throughout the movie.  It was the same with Lori Collins played by Mila Kunis.  She didn't really do a lot in the movie and she seemed to be a bit wooden in places.

All in all, while I was a bit disappointed in places, I still really enjoyed it and there are some absolutely hilarious scenes.  The one involving Sam J. Jones, for me, made the movie well worth picking up.