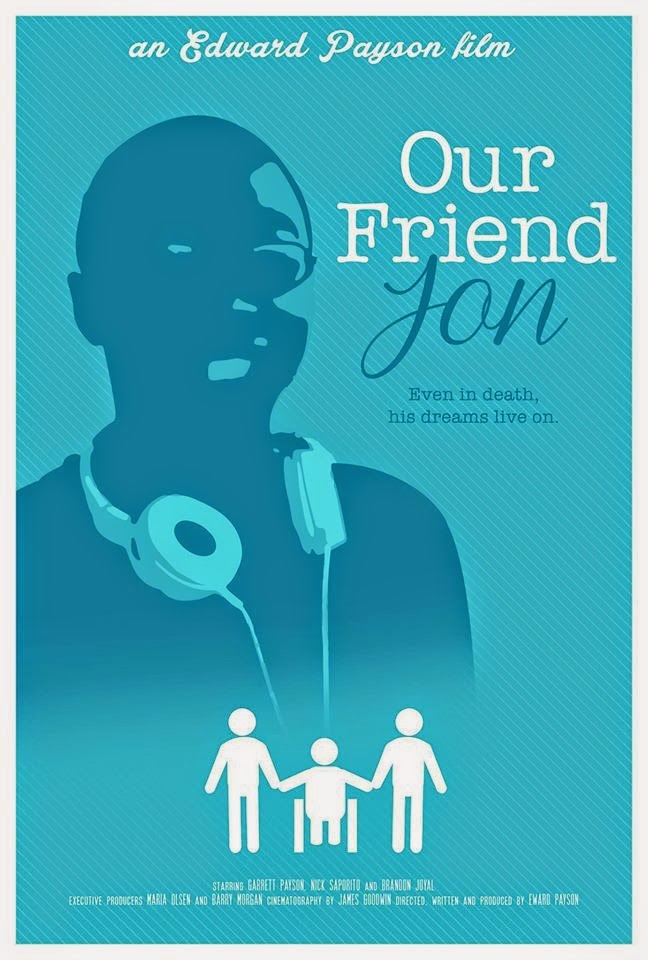 The week before Halloween will see the commencement of principal photography on Edward Payson’s next project: Our Friend Jon – The Documentary.

Our Friend Jon, a collaboration between Payson’s prolific production company, An AntiHero Production, and Maria Olsen’s MOnsterworks66, will document the story of how three friends will produce and shoot the short film, Rose Thorn, written by Jonathan Hernandez. What makes this story special is that Jon passed away from complications due to Sickle Cell Anemia while writing the script, and what makes it particularly poignant is that Jon’s three friends, Nick Saporito, Brandon Joyal and Garrett Payson, all lead extremely challenging lives...

What will make this film appeal to horror fans worldwide is that Rose Thorn is a horror film...it was Jon’s wish to become a horror filmmaker, and, by shooting his film and documenting the process, his family and friends will both celebrate his life and make his last wish come true.

In Edward’s own words:

“This is a project that really means a lot to my family and I. In August of 2013 our friend, Jonathan Hernandez passed away to complications from Sickle Cell Anemia. Before he passed away he was writing a script for a short film titled Rose Thorn. Upon his passing, his friends (all with disabilities of their own) decided to make his film and keep his memory alive forever. This is a documentary about three young men keeping their friend's dream alive.

We will be following Garrett Payson, Nick Saporito and Brandon Joyal over the course of one summer as they conceptualize and complete their fallen friend’s movie. The film will be an underdog story about these three boys making their friends film and in the process raise awareness for Sickle Cell Anemia.”

Neither Payson nor Olsen are strangers to the horror genre, and, so far, their companies’ joint productions have included Edward Payson’s Sunday Night Slaughters, an anthology horror feature. Shooting recently wrapped on SNS Episode 3, Fatally Yours, and they’re presently in pre-production for Episode 4, Cream Filling. Payson also produced, wrote and directed the notorious Cohasset Snuff Film as well as the chilling Morbid: A Love Story. MO66’s horror co-productions have included Brandon Scullion’s Live-In Fear, which premiered at the Los Angeles United Film Festival earlier this month, Christopher Dye’s Something Sinister, presently in post-production, and Shawn Chou’s Reunion, which should premiere later this year.

Olsen has also been pinned to appear in Rose Thorn as Rose, a vicious serial killer who chooses to share the gory details of her kills with a most unexpected audience... Olsen is well known in indie horror circles, and is currently appearing in film festival favorites Starry Eyes, Another and African Gothic. She has also been cast in Thomas Della Bella’s The Remains alongside True Blood’s Todd Lowe and Joston Theney’s Axeman at Cutter’s Creek follow-up, Axeman 2: Overkill. She has recently wrapped Hansel v Gretel, Lou Simon’s Agoraphobia (starring Cassandra Scerbo and Tony Todd), Jim Towns’s State of Desolation, Frolic Pictures’ Club Lingerie and Gore Orphanage, helmed by Emily Lapisardi and Cody Knotts of Breeding Farm fame.

More information about Our Friend Jon – The Documentary can be found here: