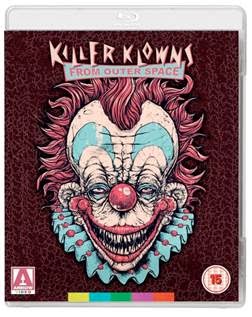 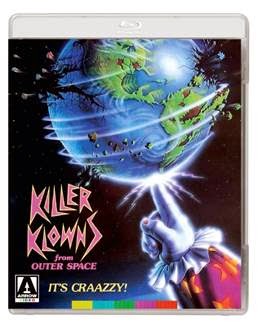 
Clowns can be terrifying at the best of times – especially when they’re Killer Klowns from Outer Space! When Mike and his girlfriend Debbie turn up at the local police station warning that a gang of homicidal alien clowns have arrived in the town of Crescent Grove, the cops are naturally sceptical. Talk of popcorn-firing guns and a spaceship shaped like a circus tent out in the woods hardly helps to convince them.

Before long, however, reports start coming in from anxious locals reporting similar run-ins with the colourfully-dressed, large shoe-wearing assailants. There can no longer be any doubt – the Killer Klowns from Outer Space are here and they’re out to turn the population into candy floss!

The sole directorial effort from the Chiodo brothers – the special effects team behind such hits as Critters and Team America: World Police – Killer Klowns from Outer Space is the wacky 1988 horror comedy classic against which all other knowing B-movie efforts should be measured.

So, in the words of the film’s opening theme song, hop aboard the “nightmare merry-go-round” and brace yourself for a cinematic experience unparalleled in this galaxy!
Special Features 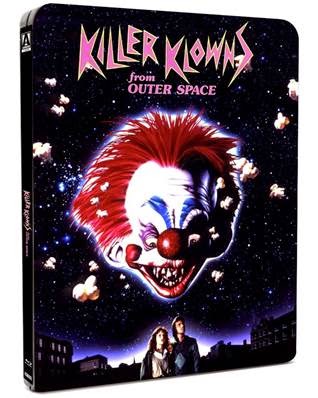 
I love 'B' movies and low budget movies of the 'so bad it's good' variety.  No doubt you would have noticed that while visiting this site.  If this release is anything to go by, Arrow Films obviously love their 'B' movies too.

With their reputation for releasing cult movies alongside superb special features, I had extremely high hopes for this one, especially considering it's reputation as being one of the best known cult movies ever made.

When you watch a movie with a title such as Killer Klowns from Outer Space, you know what you are letting yourselves in for.  A fun and camp romp that most definitely wears its influences on its sleeves with a knowing smile and pride.

Here Arrow Films have done an utterly brilliant job of making this movie look absolutely brilliant.  The picture and the sound are clear as a bell and considering the budget these guys had when making the movie in 1988, that's quite an achievement but that's not why you're here.

This movie is a hell of a lot of fun.  If you are expecting a serious, social commentary then you are in the wrong place.  If you are expecting Oscar winning performances then once again, you are in the wrong place.  However, if you are in the need for a fun, hilarious movie then this one is definitely the movie for you.  With a plot that involves alien Klowns wanting to come to turn everyone in to candy floss, then this is a movie that will have you smiling from ear to ear.  There are some utterly insane moments here, my favorite being the Godzilla style Klown.

As for the special features, Arrow Films have gone all out for this seminal cult movie.  It's a massive cliche, and one that I am guilty of using a few times here, but there really is something for everyone here in the special features.  You have behind the scenes stuff, interviews, looks at the teams really early movies and much more.  In fact, I would go so far as to even say that this is a veritable treasure trove of special features.  You really will find a lot of gems here and it's well deserving of it's high rating on that count.

All in all, this cult movie is definitely one that should be seen by more people.  Is it well acted?  Not really.  Is it fun to watch?  Oh yes it is.  Klowns landing on Earth to make humans in to candy floss?  A Godzilla style Klown?  Insane jokes and special effects?  What more could you possibly want?

Posted by Pat Scattergood at 00:31