Doctor Who: New Adventures With the Eleventh Doctor Issue 2 Review 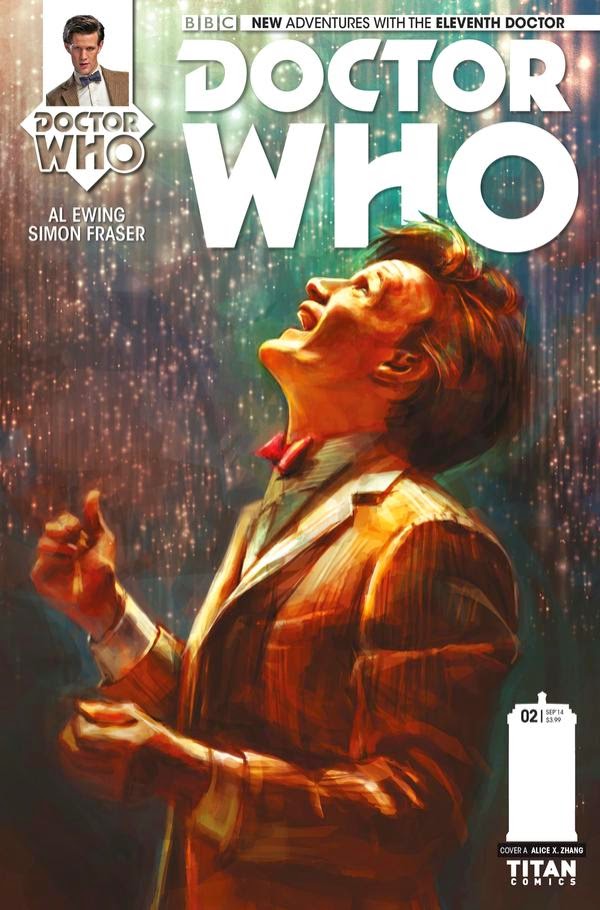 
Alice lost her mother, her job and her apartment, and was at her lowest ebb.

That's when the Doctor CRASHED into her life, chasing an alien rainbow dog - known as Kharitite - through the streets of London!

The Doctor and Alice proved a pretty good team, reuniting the Kharitite and its owner without totally decimating the Houses of Parliament.

Now they're off on a new adventure...!


After a very entertaining first issue of these new adventures featuring the Doctor, in his Matt Smith version, I must admit that I was quite excited about seeing what new adventure he and his new companion were going to embark on next.

With issue two, the story centered around the idea of a theme park on a planet where everything seemed too perfect, too happy.  Having been taken to the planet as a treat by the Doctor, something just felt a bit off about the whole planet and it's rather quick change from quiet, beautiful sanctuary in to company run theme park.

The idea behind the story seemed like a really good one.  In fact, it felt like it wouldn't have been out of place as an actual Matt Smith episode yet for some reason, it just didn't fire on all cylinders for me as a fan.  All the pieces were there, the personality of the Doctor was absolutely spot on and we even got some great development between him and his new companion but it just didn't add up to being as entertaining a read as the first issue.

That said, while the story felt a little bit like a placeholder story, there did seem to be a feeling that it's nothing but the start of a bigger storyline.  The sort of storyline that Moffat was famous, or infamous depending on your preference, for.  That happened a few times in Smith's era.  On first glance an episode would seem a little twee or unimportant and then some small moment in that story will prove to be a massive part of the overlying story.  I got that feeling on this one.  However, I did really like the final couple of pages telling us that the story is connected to the Doctor's past and that there's more to come.

Art wise, it's up to the standard set by the first issue certainly but it didn't have the same beautiful moment that the first issue had.  That had the almost greyed out beginning that really struck the reader as being the mood that Alice was feeling.  This one has gone the bright and colorful route instead and that works pretty well both on the surface as well as part of the character.  The addition of the color, for me, shadowed the fact that Alice was getting out of the feelings shown in issue one and that was a great layer to add to the story in fact and for me as a fan, shows why I find her more interesting that Gabby in the Tenth Doctor comic books.

Once again, Alice X. Zhang really nailed the character with her cover work.  She gave Smith's Doctor the child-like joy and wonder on his face yet at the same time, gave him the wise eyed look that he had throughout his era as the long running character.

Well not as breathtaking as the first issue, I'll definitely be keeping on with this series.  The story itself may not have been a ground breaking one, it still showed how much respect and love they have for the characters in that they really got the mannerisms and personalities almost spot on.  I also loved the feeling that something big was going to happen just on the cusp of the stories themselves, especially with the nod that everything that is happening is somehow connected to Smith's past.  Bring on issue 3!