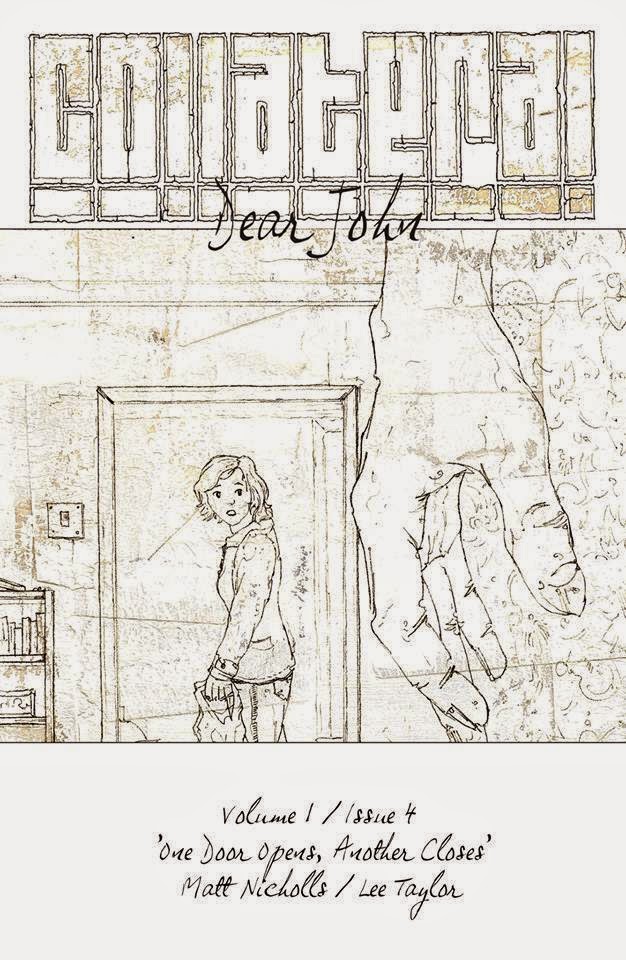 Art and Cover By
Lee Taylor

Collateral -- Dear John is a twelve issue comic book series written by Matthew Nicholls and illustrated by Lee Taylor, set in a modern day super hero world. The focus of this drama is a normal family trying to survive.

Nobody ever thinks of the damage that is left behind and has to be re-built. Not just physical damage, there is also emotional.

"You know, we're not the only ones to have these trains of thoughts..."


Visitors to this site will already know just how much I love this rather unique series from the team of Matt Nicholls and Lee Taylor.  The first three issues were absolutely fantastic, gripping and left me wanting a lot more.

Well, after a little wait, here is number four but will it carry on the momentum set by the first three issues?

The thing about this issue is that not only does it continue the momentum but it also expands on just what the characters are exactly going through.  The sheer emotion of the issue is very well written and really sucks you in to their world.  However the one thing that gripped me the most was the fact that not only do we see more of the emotional devastation left in the wake of the first three issues but we also get some nods to the things that are running just under the surface of the story with the appearance of a character that really looks like is going to be a massive change in their lives.

Once again, the subtle writing style really works for the story.  It's a little bit like seeing a puzzle being made in front of you.  You may not know what the picture is going to be but you know that with each little reveal you will learn a little bit more.  The slow and deliberate nature of the story telling here may not be to everyone's tastes but it grips me in and refuses to let me go.  I loved that about the story because it's all too often these days to throw so much at the readers in one go that the characters and story get lost under it all so a title like Collateral: Dear John is like a very welcome breath of fresh air.

It's the same with the superb art by Lee Taylor.  That to me has always been one of the main strengths of the series because Taylor's simple lines and eye for detail really make the story come to life on the page.  In fact, the stark nature of the art really brings forth the feeling of dread and depression that the characters are feeling.  You couldn't ask for a better fit.

All in all, this is by far the best issue of the series.  I personally can't wait for the next issue to see just where the new character is going to take the family and also see some more of the missing child.  You see some of the aftermath of that disappearance here and that left me wanting to see more.  Definitely a title to keep an eye on.