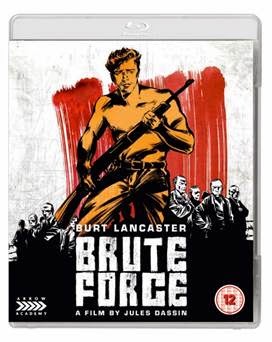 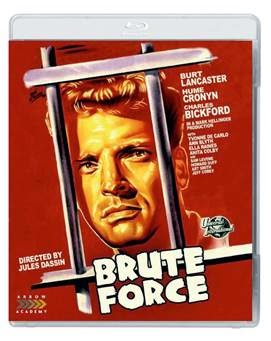 Before making the French crime classic Rififi, Jules Dassin was arguably the greatest of film noir directors, responsible for a string of gems including The Naked City, Thieves’ Highway and Night and the City. Brute Force kickstarted that run of pictures and never did a film live up to its name more.

Burt Lancaster is Joe Collins, one of a number of convicts squeezed into cell R17 intent on staging a prison break. Not only does he need to return to the side of his cancer-ridden wife (Ann Blyth), he also wants to escape the clutches of sadistic warden Captain Munsey (an unforgettable performance from Hume Cronyn) who enjoys a reign of terror over the inmates.
Beautifully shot by the great William H. Daniels, tautly written by Richard Brooks (Blackboard Jungle, In Cold Blood) and impeccably acted by its ensemble of noir familiars, Brute Force remains a prison movie classic.


Arrow Films have gotten a great reputation for releasing classic movie, not only with cleaned up transfers but also with a stack of special features too.  One of the things that Arrow Films does well is that they take movies that you may have heard about but not gotten a chance to see and treats them as well as they would a major league timeless classic.

With that in mind, I slipped this early Burt Lancaster movie in to my Blu-ray player and sat with bated breath to see just how good a job they could have done with this 1940's crime drama.  I must say that the first thing that struck me was just how brilliant a job they had done not only with the picture but with the sound too.

Considering the movie is nearly 70 years old, the picture is sharp and the sound is crystal clear, which is just as well when you hear the utterly superb score by Miklos Rozsa.  I can honestly say that the score here is some of Rozsa's best work and fits the movie perfectly.

One of the things that you will notice with this movie is the dark and brooding brutality of the movie isn't shot in the normal standard of most other 1940's movies.  The actors are light and filmed at random angles, the action is shot from places you really wouldn't expect and that really helps to give you a feeling of being involved in the lives of the prisoners themselves.

A lot of that must be placed firmly on the shoulders of the cast.  In one of his earliest movies, Lancaster does a stand up job as Collins.  You don't really learn all that much about his character, other than a few nods here and there to his use of violence as well as his wanting to break out to be by the side of his dying girlfriend.  After all of that, you don't really think of him as the stereotypical good guy but that's part of the point of this movie.  While the rest of the characters do get flashbacks, which seem like a bit of an excuse to get some female cast members in to an otherwise all male movie, it's not really about their lives outside of the prison.  Instead the movie deals with who the people are while inside the jails unforgiving walls.

That said, there is one character that stands out above all others in this movie and considering it has the legendary Burt Lancaster in it, that's not an easy feat.  Hume Cronyn completely owns the movie as the warden with a sadist streak a mile wide and absolutely no morals.  The sheer feeling of dread and menace whenever he is on the screen is palpable and utterly brilliant.

Special features wise, it's definitely a case of quality over quantity here.  There may not be a lot here for the classic movie fans but the things that Arrow Films have included really do hook the viewer in.  There were even quite a few bits of information that I didn't even know about Lancaster and his early movies.  That, to me, more than makes this worth picking up.

All in all, this is a brilliantly made and shot prison drama that will hook you in right up to the brutal and haunting ending.  There really is a feeling throughout the movie that something bad is going to happen, even worse than some of the things that are even happening to them already, so when the movie builds to its crescendo it really hits you.

An essential purchase, especially if you're a fan of the legendary Burt Lancaster.