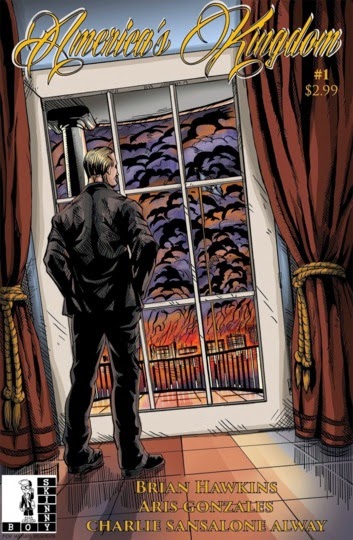 
America’s Kingdom is an ongoing comic book series set in an alternate reality where America never became a democracy after the Revolutionary War, but a monarchy. It is modern-day America but under the rule and reign of one family – the descendants of George Washington, known now as King George I, after the end of the American Revolution in 1776. The series begins shortly after the demise of the latest sovereign, King George X, when his son, Prince Geoffrey, is poised to take the throne.

Unfortunately, America's Kingdom in the last decade has gone through tremendous civil unrest and rebel groups have formed to remove the monarchy and replace it with democracy. The rebel forces are led by a mysterious and enigmatic character named Peerless Fortane. It is America's monarchy - the soon to be King and the Royal Guard of Knights against the rebel forces for democracy.


I've always been a sucker for a good story set in an alternate timeline or for 'what if' stories because when done right, you can get some really great tales out of it.

Here Brian Hawkins takes his own shot at an alternate timeline story and really crafts a fast paced and interesting take on a different history for the United States of America, here envisioned as a monarchy instead of a democracy.  That's a really interesting take and one that really hooked me in to wanting to read this

While being a very good start to the series and having some interesting ideas behind it, one of the things that I liked the most about this issue is quite simply that Hawkins tries to take a look at some of the social and economical problems that America is facing today.  That was a brave move and if not done as well as it is here, it could have come across as hokey or even as a bit of a gimmick but here, Hawkins has done a great job of fitting it in to the story almost seamlessly.

One of the things that stuck me the most about this title was the artwork.  At first, I wasn't sure about it, I'll be honest.  Yet as the issue went on, it grew on me to such a point that once I'd finished reading it, I went back to the beginning of the issue and started again.  It may not be to every taste but that's the wonder of the comic book genre, there really is a style of art to entice everyone if you know where to look.

The one thing I didn't like, and this is just be being a little too picky, is that the soon to be king kept swearing so much.  I don't have a problem with cussing in a comic book at all but with it happening so frequently, it just felt a little bit like the character was trying too hard..

All in all, other than that one minor complaint, I really did enjoy this rather interesting take on an alternate timeline version of America.  I, for one, can't wait to see what issue two has in store.

For more information and to donate to their Kickstarter campaign then visit their page here.
Posted by Pat Scattergood at 05:24