Where the Witches Lurk Issue 6 Review 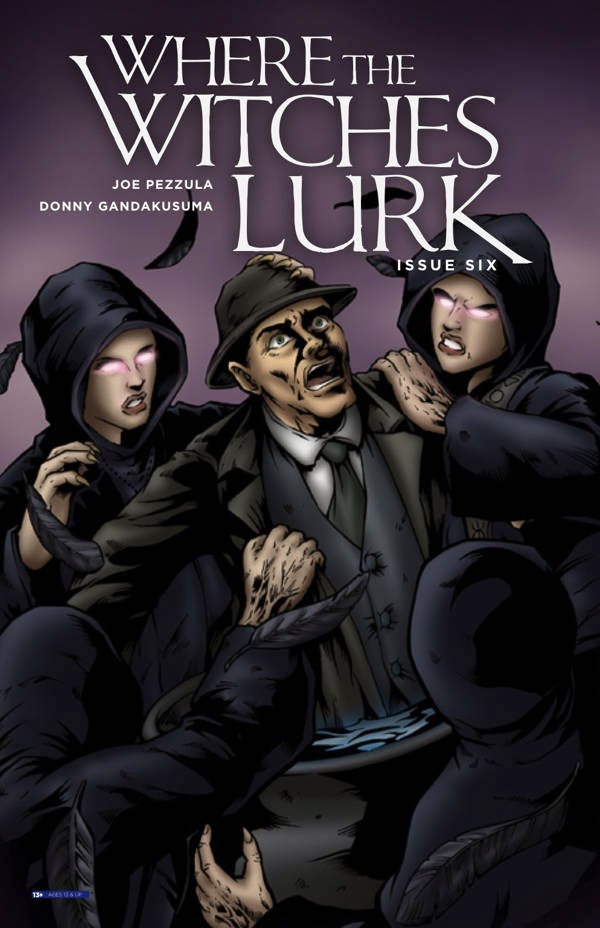 Gina and Tina learned about the Dark Witch's history in Haslow Falls as Sarah told the tale of her beginnings.  They prepare for their final battle in the hunt to save their father.

Meanwhile, Smythe managed to save LaMontagne and eliminate the Dark Witch's possession of Officer Fordyce, who had become a danger to the town's police force.

Smythe now holds the key to the Dark Witch's powers, while Tina and Gina must finally face her in...


As a big fan of the first five issues of Where the Witches Lurk by Joe Pezzula, I couldn't wait to get my hands on to issue 6.  It promised to be the culmination of the storyline but at the same, offered to teach us more about the characters we have grown to be so interested in.

The one question that plagued me before reading this was just how was Pezzula and his team going to not only keep up the momentum of the other issues but also wrap the storyline up enough to please the fans that have been present throughout the six issue run.

Well I must admit that while not all the loose ends were tied up in a nice, neat bow, that's fine because Pezzula has made a very brave move in giving this issue a rather open ending.  Just what will happen to the family next?  Will the witch ever be truly defeated?  What else is in Sarah's past?  There is a lot that while I would love to get the answers to, the open ending works because it brings the story full circle but also gives a good nod to, hopefully, future issues.

The story itself had a massively quick pacing to it, which in lesser hands would have felt rushed and rough but in Pezzula's hands it felt almost like a supernatural action movie.  Talking of action, it came thick and fast in this issue and had a great showdown between the girls and the Dark Witch.  The only problem I had with the quickness of the pace of this issue was that I would have liked to have seen and heard a little more of the characters involved and seen a bit more detail in just what they were doing to stop the halt of the witches power.  However, what is here is superb and with the open ending that I mentioned earlier, we'll hopefully be getting some more tales set in this world.

Art wise, it's been one of the most consistent series for quality that I have read in a long time.  I would even say that as a writer myself, this series has made me want to work with the team themselves.  I don't normally say that about a lot of artists, especially in a review, but the art here was consistently good for the entire six issue run.

All in all, I'm definitely hoping to see a whole load more of these characters from Pezzula and his motley crew of artists.