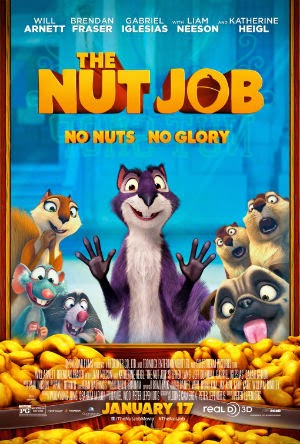 
An incorrigibly self-serving exiled squirrel finds himself helping his former park brethren raid a nut store to survive, that is also the front for a human gang's bank robbery.


As the father of a five year old, I tend to end up watching a whole load of family movies both animated and otherwise.  Some have been absolutely brilliant, some have entertained him but bored the daylights out of me and others have been absolutely awful.  Where would this new offering starring Will Arnett, fresh off of his hilarious performance as Batman in The Lego Movie, end up?

Well, I have to admit that while it didn't entertain me as much as some of the other movies I have watched with my son, neither was it as bad as some of the reviews have made it out to be.

The thing that obviously struck me the most was just how beautiful the animation is.  It's definitely the look of the movie with it's subtle nods to the 1950's that really saves the movie from being a forgettable animation.  The level of detail, while not up to the massively high standard of Pixar, is absolutely beautiful and looks fantastic, especially with the animal characters.

However, the story itself isn't the most original in the world but is still mostly entertaining.  The one problem that I had with the writing is that there were a couple of scenes where there was so much happening and so many characters that they tended to all merge in to a bit of a mess.  That said there were some great scenes that my son howling with laughter.  The humor may not be the best and most intelligent that I have ever seen in a family movie but it's enough to keep the little ones entertained at least.

With such a great cast, I have to admit that I was expecting little more 'bang for your buck' in the performance stakes.  A couple of the characters just seemed to be going through the motions but I really enjoyed Liam Neeson as the Raccoon.  Neeson really seemed to be enjoying the role and it really showed in the finished product.

All in all, I wouldn't say that this is an essential family movie but it's at least worth catching to keep the little ones entertained.

Posted by Pat Scattergood at 00:57