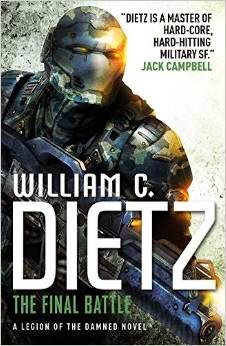 
Decades ago, the corrupt Imperial government was overthrown and the Hudathans defeated.  But peace with such an aggressive alien race could not last, and war has broken out once more.

The Hudathans, imprisoned on the very planet they devastated, are on the rise - and this time they have a cyborg army of their own.


Titan Books decision to reissue the Legion of the Damned series by William C. Dietz was a superb one.  The renowned science fiction series has been steadily finding new fans as well as reminding Dietz's fans of just why the series is so beloved by science fiction fans.

I didn't get a chance to read this one the first time around but when Titan Books started their run of reissues of the series, I jumped at the chance to sink my teeth in to another installment of the series.

One of the things that struck me the most about this one is that Dietz had done really well at building up the slowly growing feeling of dread and angst throughout the rest of the stories that when the action hit, it more than did the rest of the series justice.  In fact, it had such a cinematic feel to it that you could picture every inch of the battlefield, feel every weapon blast and it hooked me in to such a point that there were times when you even felt that the story was unfolding right before your very eyes.

A lot of the time it's the characters that are given the short end of the stick in these sorts of stories with the author instead going for all out action but that's not the case here at all.  Dietz not only gives the characters room and time to grow and to breathe but also for the readers to want to know just what will happen to them next.  When someone of them inevitably fall during the story, you are shocked that it would have happen to them.  I liked that emotional link to the story.

It is easy to see why the series and why William C. Dietz is so renowned.  The story is involving, exciting and full of some brilliant twists and turns that will thrill even the most hardened science fiction fan.  If you are a fan of Dietz then there's a fair chance that you will already have this one but if you haven't, then it is definitely well worth adding to your shelf.